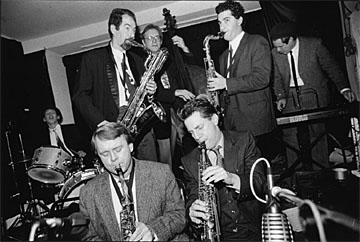 
“Posterity will remember the Microscopic Septet as one of the best bands of the 1980s." -
Francis Davis, Jazz In The 80s.


In 2006, Cuneiform Records released two double CDs, which included all of the Micros LPs from the 1980s, and much unreleased material, including the first full release of their theme music for NPR's “Fresh Air with Terry Gross," with original cover art by Art Spiegelman. The CDs, “Seven Men In Neckties: History of the Micros Vol. 1" and “Surrealistic Swing: History of the Micros, Vol. 2" recently received 4 and 4 stars respectively in Downbeat Magazine, and Francis Davis listed them among the Best Reissues of 2006 in the Village Voice.

To celebrate the release of those CDs, the original Micros reunited in Nov/Dec 2006, and played a few select dates on the US East Coast, including a show in Philadelphia at World Caf Live hosted by Terry Gross, and a sold-out show at Joe's Pub in NYC. Joel Forrester and Phillip Johnston were Terry's guests on Fresh Air, and that interview is archived online.

With the success of these events, the Microscopic Septet has decided to make their reunion a regular irregularity (co-leader Phillip Johnston's current residence in Sydney, Australia makes any more than that impractical). In Nov/Dec 2007, they will re-reunite for European tour that will take them to Berlin, Amsterdam, Vienna and elsewhere, and to record a new CD of material drawn from the voluminous book of unrecorded Micro tunes, for a CD to be released on Cuneiform in Sept 2008. Hot off the road, they will play one single US gig, on Thursday Dec 13, 2007 at Sweet Rhythm in New York City, where they will play the unrecorded material which they will go into the studio the next day to record.

Some response to the 2006 Micros reunion and the CDs:

“The Micros--with four saxes plus rhythm--brought strong playing and impeccable craftsmanship to the table, even as they shattered stylistic boundaries and proved that art music could be infectiously fun." --David Adler/Jazz Times