SOURCE: ALL ABOUT JAZZ PUBLICITY
February 10, 2009
Sign in to view read count 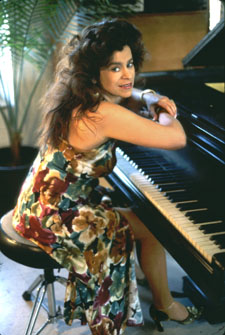 Michele Rosewoman has made her mark in the jazz world as a highly original artist, fusing Afro- Cuban influences with intelligent and modern post- bop. Throughout her varied career, Michele has performed with such jazz luminaries as Julius Priester, Oliver Lake, Reggie Workman, and with Celia Cruz, Paquito D'Rivera, and Orlando “Puntilla" Rios. As a bandleader, she has led two ensembles, New Yor- Uba and Quintessence, to tremendous critical acclaim.

Michele's most recent recording, The In Side Out, was released in 2006 on Advance Dance Disques. The album, fusing jazz with Cuban folkloric music, R&B, and funk, features her Quintessence ensemble along with special guests including Pedro Martinez.

Praised by Downbeat as “energetic and propulsive," Michele's trailblazing ensemble New Yor-Uba debuted at New York's Public Theater in 1983 with featured member Orlando “Puntilla" Rios. Saluting the Orishas (Yoruban deities) in a contemporary jazz setting using original compositions and contemporary arrangements of traditional Yoruban (Nigeria) and Arara (Dahomey) chants, the ensemble has forged an inimitable style described by the New York Times as “jazz that didn't simply use Afro-Cuban rhythms as decoration, but layered melodies and rhythms with equal force and weight." Now in its 25th year of performances, New Yor-Uba continues to delight audiences throughout the United States and Europe.