Ultrafaux stands out from all of the other Reinhardt-inspired bands because they perform original material: strong tunes played by a hot band- and here the core is augmented by clarinet, violin and accordion.
—Tom Cole, NPR and WPFW 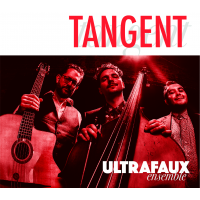 slideshow
Inspired by the legendary Django Reinhardt (1910-1953), Baltimore guitarist and bandleader Michael Joseph Harris leads two Gypsy jazz bands. Comprised of the same core members, both are releasing their fourth albums in North America and Europe in 2020 on the Swing Underground label. With the help of numerous guest artists, they are busting the boundaries of the genre.

A respected ambassador of traditional Gypsy jazz, Harris founded the popular Hot Club of Baltimore in 2012. Two years later he added a second group, Ultrafaux, taking the music to a new level with his own contemporary compositions. The resulting repertoire reflects influences of Romani and Balkan folk, swing, funk, jazz, blues, Dixieland and bebop. After years of paying homage to those colorful roots, Harris has become a popular guest artist and collaborator. One of the most prolific composers in the genre, he jumps even further out of the box with his latest endeavors.

Harris has led his groups in countless concerts and recordings, earning abundant praise from the press. About Hot Cub, NPR’s Tom Cole says, “These folks can handle the complexities and breakneck speeds of Roma swing...we can come close to the experience of what it must have been like to hear Django Reinhardt play...in 1937.” Referring to the more contemporary Ultrafaux, Sam Sessa of WTMD Radio says the group, “breathes new life into jazz.” Baltimore Style Magazine calls Michael Joseph Harris “One of the most talented musicians on the Baltimore scene,” and the waves he’s been making are reaching distant shores.

In the spirit of Django Reinhardt, he has continually quested for new sounds, embracing a variety of styles. Now, in addition to bringing his bands to jazz clubs and festivals, he is heard on bluegrass and folk festival circuits and related radio. Listening to either new album gives an experience tantamount to attending one of those festivals.

For the 2020 recording, Tangent, the Ultrafaux trio swells in size, becoming an ensemble. In this configuration, the band moves into exciting uncharted territory, expanding the range and possibilities of what it can do with the compositions and allowing the music to cross the boundaries between the genres of folk, world, and jazz.

Composed in 2019, Track 1 is a swing tune in D minor titled “Jaguar,” and it’s a kind of homage to traditional Gypsy jazz. A familiar melody bounces through a typical minor chord sequence, then unfolds into a somewhat mysterious section meant to capture the dual nature of the cat (strong and wild, but also quiet and elusive).” The melody moves from the familiar and traditional to a kind of romantic classical section. “Django used this kind of device in his compositions at times, as in the bridge of ‘Douce Ambiance,’ Harris explains. “I like it when a melody mixes two worlds together in a new way.” The tune features violinist Jason Anick.

Track 9, “Talkie Walkie,” was also composed in 2019, this one in C minor. After hearing the strong melody in his head, Harris added chords and harmony, imagining a secret communication between young friends playing spies. The playful title refers to the French term for Walkie-Talkies. The song features Patrick McAvinue on violin and Giacomo Smith on clarinet.

“Je ne sais pas” on Track 10 was originally recorded in 2014 on Ultrafaux’s first (self-titled) CD. The waltz has a beautiful melody and subtle, poignant quality. Says Harris, “I really love this song because it exudes such a distinct feeling and mood.” The feeling of intimacy in the song is brought to its fullest expression in this new version with Patrick McAvinue on violin.

Michael Joseph Harris is concurrently releasing a more traditional self-titled album with his group, Hot Club of Baltimore. For this 2020 album vocalist Alexis Tantau and guitarists Michael Joseph Harris and Sami Arefin provide a firm foundation. It was initially slated as a “best of” recording, but Harris could not help but follow his Muse beyond the original concept and the album grew to include 13 tunes. Tracks 2, 3, 6,11 and 12 are newly recorded.

Among the album highlights is Track 1, “La Vie en rose,” with lyrics (and possibly the music) written by Edith Piaf in 1945. (Historical references vary greatly on the subject.) Some attribute the score to Marguerite Monnet and Louis Guglielmi; others to him alone. Everyone agrees that English lyrics were written by American Mack David, but vocalist Alexis Tantau sings in French on this and Tracks 3, 9, 12 and 13. This remixed/remastered version features Patrick McAvinue on violin, spicing up the track originally recorded by guitarists Michael Joseph Harris and Sami Arefin and bassist Eddie Hrybyk.

The creative drive of the Harris ensembles is evident on Track 6. “Ständchen” by Johannes Brahms could hardly be more unexpected. Alexis Tantau, who has operatic training, brought the idea of rearranging this classic piece to Harris, who was surprised at the positive outcome. “It worked really well,” he says. “It’s almost bluesy with Thelonious Monk style chords.” Tantau tackled the German lyrics with relish. When the band performed the tune at the opening of the D.C. Jazz Festival in 2019, it was wholeheartedly embraced by the hardcore jazz audience. On this recording violinist Evan Price (Hot Club of San Francisco), and bassist Zach Serleth join Harris and Arefin.

Track 11 is an American classic. Writers Billy Rose, E. Harburg and Harold Arlen would surely approve of this swinging rendition of “It’s Only A Paper Moon” which showcases the combined talents of trumpeter Nico Sarbanes and clarinetist Halley Shoenberg coloring the foundation built by bassist Zach Serleth and guitarists Harris and Arefin. The track demonstrates how Hot Club of Baltimore embraces the perfect amount of nostalgia to win over cross-generational jazz listeners. Indeed, both the more traditional sounds of Hot Club of Baltimore and the band’s contemporary offspring, Ultrafaux, have been embraced by fans of all ages.

A robust spring touring schedule and album releases for both bands were interrupted by COVID-19 in 2020. North American and European dates are still being re-scheduled. Meanwhile, both bands are performing successfully in outdoor shows and numerous online concerts. They are likely the busiest band in the Mid-Atlantic despite high standards for social distancing for the safety of artists and fans.