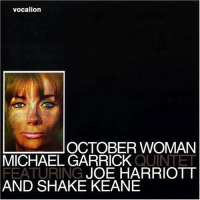 slideshow
Michael Garrick was an English jazz pianist who today is little known in the U.S. Born in 1933, Garrick was a self-taught musician who majored in English literature. Emerging from college in 1959 into a British world where mod jazz and poetry were trending, Garrick wound up the musical director of Poetry & Jazz in Concert, a touring ensemble of performance artists. From 1965 to 1969, Garrick led a contemporary jazz group that included saxophonist Don Rendell and trumpeter Ian Carr. But in 1964, Garrick recorded an unusual quintet album called October Woman that was an extension of the touring group.

Recorded in London for the U.K.'s Argo label in November '64, this unusual album featured Shake Keane (tp), Joe Harriott (as), Coleridge Goode (b), Colin Barnes (d) with Simon Preston (org) and the Elizabethan Singers. I say unusual because each song has a different sound and feel. At the time, Garrick worked in the Jazz & Poetry group with Goode and Barnes, adding Keane and Harriott for this recording. Ten of the 12 tracks are conventional in that they feature a defined melody. Anthem, which appears twice, has a free-jazz approach.

According to Garrick's liner notes, the songs were written specifically for this group. Seven Pillars was a result of the song's original time signature—7/4—which was changed to 4/4. Little Girl has a Neal Hefti feel. Sweet and Sugary Candy is a mid-tempo swing tune and purposefully retro, complete with a Slam Stewart sing-along as Goode bows an arco bass solo. Blue Scene has a soul-jazz feel and according to Garrick is a rap on clubs that stopped featuring jazz in exchange for music with a big beat. Garrick writes that Return of an Angel and Echoes are “as descriptive as their titles may allow them to be."

As for Sketches of Israel, Garrick writes that the song is a “slow, rhapsodic theme written in the first place for a descriptive poem by Jeremy Robson. Here we give it quite a different treatment." Fairies of Oneiros is a tribute to the god of dreams and “the beings that hover on the threshold of our consciousness, never letting us see too much." Wedding Hymn is a fascinating Elizabethan classical organ work with trumpet and drums that switches to jazz along the way. The singers also can be found in the second Anthem.

This is an exceptional and fascinating album with superb players and a poetic, moody mission. A must own, which is true of most of Garrick's albums.

Bonus: Here's Song By the Sea from the Michael Garrick Sextet's album, Promises (1965), with Garrick on celeste...

And here's Garrick's Ursula from his Black Marigolds (1966) album...