In the right hands an alto saxophone can emit airy sounds that are buoyant and light and move smoothly across any disturbances that might intersect their paths. New York reedist Michaël Attias is a fluid, inventive improviser whose performances are marked by that deft and nimble touch. --Peter Margasak, The Chicago Reader 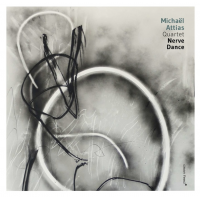 “Like a high-quality electronic product manufactured by the Panasonic Corporation, the career of alto saxophonist Michaël Attias has always involved being slightly ahead of his time...”—Ken Waxman, JazzWord

Nerve Dance—saxophonist/composer/bandleader/conceptualist Michaël Attias’ sixth album (available on Clean Feed Records, March 10, 2017), which deals with the aesthetics of spontaneity, the theory of elasticity and the concept of equality in music, is an expansive, spirited debut from Michaël Attias’ new Quartet, featuring Aruán Ortiz (piano), John Hébert (bass) and (drums). On Nerve Dance, we are regaled with hearing four hearts, minds and bodies hooking up at an extremely high level on nine Attias compositions, and two from Hébert. Each piece exercises a different set of muscles and faculties for the band and every member of the Quartet carries within them the historical knowledge and a fluency in the multitude of dialects of this music; consequently we hear them free within the compositions, deep into the zone of this collective creation, transcending their respective instruments and completely surrendering to the music.

Attias has been influenced by literature, film, painting, extensive travel, life in general, and of course, a wide spectrum of music, ranging from Moroccan Gnawa rhythms to Renaissance Polyphony, Ligeti, Debussy and the 2nd Viennese School; the AACM, Ornate Coleman, Cecil Taylor and Steve Lacy, also Andrew Hill, Paul Motion, Lee Konitz and Warne Marsh, plus the first and lasting loves, Ellington, Coltrane, Monk, Miles and Bird. Attias’ music, while dedicated to “creation” rather than “re-creation”, remains firmly rooted in the avant-garde, conceptualized as the true tradition of this music from its earliest recordings onward. Attias asserts that the revolutionary, adventurous spirit of the major figures of jazz, including his aforementioned influences, made bold strokes of genius that only seem inevitable in retrospect, and have paved the way for the audacious improvisers of today who remain singular and fearless in the face of mass conformity. There exists an instinctual, visceral need in Attias and his cohorts to play music that is honest, that rejects inertness and fully embraces the meaning of creativity and evolution. This music is found on Nerve Dance.

Attias, a quietly fierce, improvising force on the international scene, has worked with Anthony Braxton and Paul Motion, and is a frequent collaborator/sideman for Kris Davis, Ralph Alessi, Tony Malaby, Oliver Lake, Anthony Coleman (and many others), and also leads three bands, his new Quartet, Renku (featuring John Hébert and Satoshi Takeiship), and Spun Tree (featuring Ralph Alessi, Matt Mitchell, Sean Conly and Tom Rainey). He has also composed for theatre, film, big band, and orchestra. So why this new Quartet, and why Ortiz, Hébert and Waits? “There was a particular chemistry I was looking for and a kinship of approach that I can only describe as a fiery mathematics whose combustion is in the blowing itself, a group identity so strong that it becomes the overriding composition. This band is big fun to play with. Everyone has in common a deep lyricism and a very personal way of bringing design to the turbulence and turbulence to the design. We all share a fearless commitment to every moment of the music, to making it breathe and dance—balancing the yins and yangs, fire and receptivity, mystery and clarity... Hébert, Nasheet and I have played together in countless situations over the last fifteen years, and, of course, those two for years played together with Andrew Hill whose music is a big inspiration to us all. They bring a deeply singing quality and dance to everything they do. Aruán is the new agent in this chemistry; he has all the qualities I've mentioned and a kind of visionary approach to sound and time, order and chaos that I really appreciate. Music demands of us, as players and listeners, that we put our emotions, minds, bodies, and nervous systems on the line and give it some attention, but the reward is that we can all share in the dance”, explained Attias.

More on the music on Nerve Dance with Michaël Attias: Dark Net is the most recorded piece of Attias’. Previously on Renku (2005), Renku Live in Greenwich Village (2016) and on Eric Revis' Parallax (2013) with Jason Moran, Ken Vandermark, and Nasheet Waits. “Hearing Eric's version prompted me to revisit the piece both on the last Renku album and on Nerve Dance. It's in 3/4, 24 bars. The melody and bass line are two snakes coiling and uncoiling around a 6-beat phrase inspired by Elvin Jones. Intervals and durations are twinned.”

Nerve & Limbo is a diptych—two radically different approaches to the same harmonic material, which are woven back into the structure of the album later as Le Pèse-Nerfs and Ombilique. “The ‘active’ Nerve section articulates a metric-intervallic structure of variable length and transposition, the ‘passive’ Limbo is a listening to the accumulation of its overtones, inspired by the piano sound of dear departed friend Masabumi Kikuchi.”

Scribble Job Yin Yang. “Another in the series of tunes I've written on the NY subway. They're all definitely New York City tunes. The title echoes the underlying rhythmic chant of 6 against 8. The scribble of the melody is a type of cadence inspired by Charlie Parker.”

Moonmouth. “The melody is Ariadne's thread through the maze of a fully notated piano part in 17/8. The harmony explores a sequence of superimposed triadic inversions. It establishes the strictest grid on the album.”

La Part Maudite. Written when Attias was 20. “I had forgotten about writing this until I found the chart in a box when moving Uptown in the summer of 2015. The melody is written across a 6 bar additive cycle (4/4, 2/4, 5/4, 3/4, 6/4, 4/4). The title is lifted from Georges Bataille's book of economics (translated as ‘the Accursed Share’)—in which he says: “The sexual act is to Time what the tiger is to Space.” That line could be the epigraph to the whole album.

Le Pèse-Nerfs. Title of Antonin Artaud's 1927 collection of poems, journal fragments and essays. It can be roughly translated as “the Nerve-Scale.” “Artaud's idea of the poet-artist-actor playing on his/her nervous system, breath, physiology as on an instrument to register and express thought, vision, extreme states of being, is a big influence for me... This revisits the material from the ‘Nerve’ section of Nerve and Limbo.

Rodger Lodge. “A beautiful tune by John Hébert, one of my favorite composers of today... shades of Mingus ballads, serpentine form and melody.”

Dream in a Mirror. “I was in a recording studio the day Ornette Coleman died. I have loved and revered Ornette since I was fourteen years old. All I could do when I heard the news was to play his ‘Clergyman's Dream’ over and over. This ‘Dream’ is its reflection in minor.”

Ombilique. Revisits the material from the “Limbo” section of Nerve & Limbo.

Nasheet “is a tribute in 3/4 to our great drummer by John Hébert. It explores a similar rhythmic terrain and serpentine counterpoint to ‘Dark Net’, which opens the album. I feel a deep kinship to John's playing and writing, and we all love Nasheet!