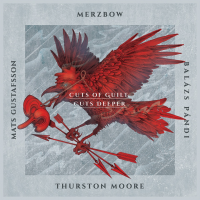 slideshow
How did renowned Japanese noisemaker Merzbow (aka Masami Akita), Swedish saxophonist Mats Gustafsson and Hungarian drummer Balazs Pandi follow up their majorly intense statement made on their tumultuous debut album, Cuts, which was released in 2013? By adding another ingredient to the volatile mix, in the person of skronking guitar hero and Sonic Youth founder Thurston Moore they’ve taken things up a notch or two on the Richter scale on their RareNoiseRecords follow-up recording. With Gustaffson’s roaring baritone sax blending with Moore’s shriekback guitar, Pandi’s intensely throbbing beats and Merzbow’s subversive white noise barrages, it all adds up to a sonic pummeling of epic proportions on the remarkable two CD-set, Cuts of Guilt, Cuts Deeper.

In a post-Cage-ian world where there are no wrong notes – in fact, no notes at all, just silence and the absence of silence – the enigmatic Merzbow is a Magellan of sound, fearlessly traveling uncharted waters on each new project he undertakes (he has made over 350 recordings since 1979). Born on December 19, 1956 in Tokyo, he was originally attracted to rock guitarists like Jimi Hendrix, Lou Reed and Robert Fripp, and later was influenced by free jazz icons Albert Ayler, Cecil Taylor and Frank Wright as well as electronic music pioneers like Karlheinz Stockhausen and Iannis Xenakis. “Then I found the forum for mixing these influences into pure electronic noise,” he said in a 1999 interview with EsoTerra Magazine: The Journal of Extreme Culture. “I was trying to create an extreme form of music.”

Merzbow has found true kindred spirits in Pandi, who has collaborated with him since 2009, and Gustafsson, a stalwart on the Scandinavian free jazz scene. Pandi’s explosive drumming has propelled such other experimental bands as Blood of Heroes, Red Hill featuring Wadada Leo Smith (on RareNoiseRecords), Zu and two other groups also from the RareNoise roster – Obake (featuring guitarist and vocalist Lorenzo Fornasari) and Metallic Taste of Blood (featuring guitarist Eraldo Bernocchi, Porcupine Tree bassist Colin Edwin and keyboardist Jamie Saft). Gustafsson is a member of the Fire! Orchestra, the Barry Guy New Orchestra and The Thing with drummer Paal Nilssen-Love and bassist Ingebrigt Håker Flaten. He has also worked with many free jazz musicians including German drummer Paul Lovens, Dutch pianist Misha Mengelberg, Chicago-based saxophonist Ken Vandermark, New York-based trumpeter/saxophonist Joe McPhee, New York-based drummer Hamid Drake and the Italian experimental band Zu. He claims Little Richard, The Cramps and Entombed as early inspirations in his musical development. “I started off playing electric piano in a local punk band in my home town Umeå when I was 13,” he says. “I was lucky to grow up in northern Sweden in a small university town that actually had a jazz club and a very active music scene. I heard Steve Lacy, Sonny Rollins, Derek Bailey and Per Henrik Wallin really early as my main jazz kicks. But as Evan Parker used to say, ‘My roots are in my record player.’

Thurston Moore, a ferocious axe-mangler from the Sonny Sharrock “shards of splintered glass” school, formed the alternative rock group Sonic Youth with bassist-vocalist Kim Gordon in 1981. They were later married in 1984. Alongside fellow guitarist Lee Ranaldo, Moore made extensive use of unusual tunings and feedback, straddling the inside-outside divide on 16 studio albums, including influential recordings like 1990’s Goo, 1992’s Dirty, 1994’s Experimental Jet Set, Trash and No Star and 2004’s Sonic Nurse.

Since disbanding Sonic Youth in 2011, Moore has recorded solo projects, including 2011’s Demolished Thoughts and 2014’s The Best Day. In 2014, he performed a searing duet with fellow experimental guitarist Nels Cline as part of an Ornette Coleman 84th birthday celebration in Brooklyn’s Prospect Park.

“The original trio was initiated by Balazs,” says Gustafsson. “He and Masami have played some together before. I played together with Masami and Sonic Youth and also made various recordings with him and Jim O’Rourke in Japan. I had never played with Balazs before, so I was delighted to work with him on the first Cuts project.” The three free spirits forged an indelible chemistry on a tour together prior to recording Cuts. “This group really hit something amazing during that tour and we took that energy into the studio.”

For Cuts of Guilt, Cuts Deeper, the four kindred spirits went into the studio and came up with four extended tracks. CD 1 is comprised of the 20-minute “replaced by shame, only two left” and the 18-minute “divided by steel, falling gracefully.” CD 2 contains the dynamic 21-minute jam “too late, too sharp — it is over” and the extreme anthem “all his teeth in hand, asking her once more.” Drummer Pandi calls it ‘mystery in sound.’ As saxophonist Gustafsson said of their purely improvised session, “We had no game plan. That usually does not work so well. It all depends on the day, the energy and of course the room. And oh boy, that room was freakin’ spectacular! It actually had a skateboard ramp! It was a truly spectacular recording. It went super-fast — just a wall of noise-poetry with layers and perspectives changing all the time. And to have Thurston Moore in the mix just added colours, layers, energies and sound. It was a very inspired sharing with the others.”

When we hung out backstage, we were talking about trying to hook up a quartet session sometime with Mats and Masami again. We already had a gig planned with the trio in London, where Thurston currently lives, so we figured the only day he is spending around that time in London is the one we had for recording the follow up album to Cuts. So he was on board immediately.”

As for how this new Cuts project with Moore may differ from their first Cuts outing, Pandi remains philosophical. “From my side, I can’t really talk about differences. I don’t approach anything differently. There are no tactics, concepts, nothing. Only deep listening and playing accordingly. I learned that from Masami early on. The night of our very first show, I approached him backstage, introducing myself. As it was the first time we met, I thought we would sit down and discuss any concept he may have wanted to talk through. But when I asked him about it, he only said one word — ‘improvisation.’ That’s how it always is with Masami. And that’s how we approached this new recording in the studio.