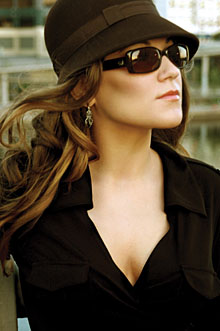 slideshow
With her debut album Worrisome Heart, Melody Gardot displayed her instinctive gift for transforming the traditions of jazz and blues with her personal kiss of life.

But even her most ardent admirers will be amazed at the giant creative leap forward she has taken with the follow-up, My One And Only Thrill.

Mixing Latin rhythms, finger-snapping blues and deep, smoldering torch songs, it’s an album that seems to have been shaped from several lifetimes of love, loss and longing. Though she’s still only in her early twenties, the rapturous reception accorded to Worrisome Heart by fans and critics meant that she suddenly found her life moving at triple speed, as Melody and her band bounced between gigs, hotels and airports as demand blossomed across several continents.

“We were touring for nine months, though sometimes I’d have a week off if I was lucky,” she explains, in between bites of sushi. “But in reality, I never really had time ‘off’ because I was making the new record in between touring. That process was daunting, but beautiful too, because it gave me the opportunity to work and think, and work and think again, so I could reflect back rather than having to make constant snap decisions. It was an interesting way to approach making a record.” Despite her exacting schedule, she made sure that her plans for My One And Only Thrill had been painstakingly laid.

“We walked into the studio with all the songs written, which was important because you need to have a good idea about how the record’s going to be. You need to have an idea, work it up with the musicians and get the rhythm tracks right. Then you can decide which songs need strings and which ones can live without them. It’s a process of stripping down what you’re doing to make room for something else -- essentially dividing it in half to make room for the orchestra.”

This meant that members of her band – take a bow Ken Pendergast (bass), Patrick Hughes (trumpet) and Bryan Rogers (sax) -- often had to play with even more restraint than usual, though thanks to the rapport they’ve built up during months of performing together, she wouldn’t want to go into the studio without them.

“It was as if someone was saying to them ‘you could play all this stuff, but I want you to do absolutely nothing!’” she says, laughing. “Yet it was perfect because these are all my guys, and that makes the record special. I think what makes a record great is to have people around you who are instinctively in your head- space and know what you need for those tunes. These guys have played with me long enough to know that without even thinking.”

Under the helmsmanship of producer Larry Klein (fresh from his Grammy®-winning work with Herbie Hancock on River: The Joni Letters and a collaborator with such artists as Don Henley, Peter Gabriel and Steely Dan’s Walter Becker), the subtle empathy that the musicians bring to their live performances is recreated on the album.

Another of the disc’s secret weapons is the addition of Vince Mendoza’s orchestral arrangements. As well as being a solo artist and composer, the Connecticut-born Mendoza has excelled himself in collaborations with such musical thoroughbreds as Al Di Meola, Joni Mitchell, Kyle Eastwood and Joe Zawinul, and he even wrote arrangements for Robbie Williams’ album Swing When You're Winning. On Melody’s album, his arrangements run the gamut from sleek, skipping Brazilian rhythms to slow, brooding dramas. One obvious highlight is “Our Love Is Easy,” a steamy epic of forbidden love in which Melody’s sensual vocal rides over Mendoza’s painfully intense string arrangement. Echoes of Peggy Lee or Frank Sinatra in his “Only The Lonely” period are probably no accident.

“We were recording at Capitol and Vince was saying ‘if you don’t start writing happier tunes you’re never going to have a career,’” chortles Melody. “He was joking! In a way though, it was ironic because the lyrical sentiment of “Our Love Is Easy” sounds like everything is wondrous, yet you hear the arrangement and it echoes the sentimentality of a funeral procession as the song begins. It has that for very specific reasons, because the song is about a great love and a great love lost.

There’s a line ‘they say the poison vine breeds a finer wine’, and that’s to say the things that are not necessarily offered to you sometimes offer greater promise. Therein lies the irony, that the love you’re talking about is beautiful, but it’s laid within the knowledge that it’s impossible.”

The Mendoza magic has also been liberally sprinkled over the album’s title track. It’s a haunting ballad which seems to hang in space, held aloft by Melody’s delicate piano playing and a shimmering mirage of strings. In mid-song, the orchestra veers off on a dramatic detour, spiraling upwards in a vertiginous swirl of sound reminiscent of one of Bernard Herrmann’s Hitchcock soundtracks. Also awash in rich, moody strings is the heartfelt reverie of “Deep Within The Corners Of My Mind,” while the elegant bluesiness of “Lover Undercover" (a song which she has already been testing on live audiences) has been constructed over long, legato string phrases.

But there are plenty of changes of mood too. A recurring theme of the disc is Melody’s infatuation with the music of South America, especially Brazil.

“I love Brazilian music, it’s one of my favorite genres,” she enthuses. “…Stan Getz bossa nova years, Getz/Gilberto, Jobim, Caetano Veloso… some amazing music has come from there. I think there is a sentimentality that’s very specific to the Brazilian culture itself. The voices are soft and hushed, and the lyricism is dripping with metaphors and poetics.”

Melody’s Latin leanings are given an outing in “If The Stars Were Mine.” Constructed from percussion and acoustic guitar, it’s a simple but easy-to-hum tune with lyrics painted in bright tropical colors.

“Yeah, it’s got that Brazilian feel. Actually that’s a song I wrote as sort of a sweet, tender song for a child. The last verse always kills me, I want to go ‘awwwww!’ in the middle – ‘if the world was mine I’d paint it gold and green, I’d make the oceans orange for a brilliant color scheme, I’d color all the mountains make the sky forever blue, so the world would be a painting and I’d live inside with you’. It’s incredibly sweet!”

Echoes of childhood – her own this time – recur in her version of “Over The Rainbow,” a song which has been recorded by many artists but never in Gardot’s singular Latin- flavored style. She attributes her rediscovery of the piece to having spent a lot of time with her grandmother, who used to look after her while her single mother went out to work.

“She was a sweetheart, a really good woman, and apparently one of the only people in my family that I look like. Anyway, when I was little my grandmother made me watch The Wizard Of Oz countless times. One day years later I sat down to write and I came across these chords, and I realized it wasn’t a song I was going to write but a song that had already been written: “Over The Rainbow.”

In the mysterious way that songwriters have, Melody merged her memories of the song with her passion for Brazilian music, and the results are as refreshing as they’re unexpected. Mendoza’s sunny, supple arrangement perfectly complements her deliciously relaxed vocal, blowing the cobwebs off the much-loved tune to create a 21st century classic.

“If you’re going to do a cover version you have to do something different with it,” Melody muses, “otherwise it’s like ‘why bother?’

A year ago, much of the discussion about Melody Gardot centered on the way she’d recovered from a terrible road accident and had used music as a therapeutic lifeline. But with My One And Only Thrill, the topics of conversation are going to be her musicianship, her song- writing and her astonishing artistic growth. Ladies and gents, a star is born.