"Melba!," A Tribute To Melba Liston By Saxophonist/Composer Geof Bradfield, To Be Released By Origin Records April 16 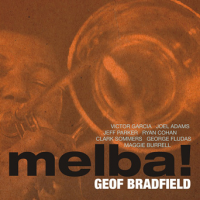 slideshow
Saxophonist/composer Geof Bradfield’s new CD Melba!, which Origin Records will release on April 16, has been a long time coming. Bradfield’s suite for jazz septet, a tribute to the great yet underheralded arranger/trombonist Melba Liston (1926-1999), received its premiere performances last summer in Chicago and other Midwest cities. It was supported by a commission from Chamber Music America’s 2011 New Jazz Works program (with funding by the Doris Duke Charitable Foundation), allowing Bradfield to research the rich Liston trove at Columbia College Chicago’s Center for Black Music Research.

And before that, there was a deep and long-standing personal connection with Melba’s music. Bradfield had discovered her through such landmark Randy Weston recordings as Uhuru Afrika (1960) and The Spirits of Our Ancestors (1991). “When I came up in the 1980s and was learning to play, everything seemed to be about extreme instrumental virtuosity,” he says. “The music of Randy and Melba was more complex. It had color and depth and a range of emotional expression. It had a real human element.”

For the concert performances and recording of Melba!, Bradfield called on trumpeter Victor Garcia, trombonist Joel Adams, pianist Ryan Cohan, guitarist Jeff Parker, bassist Clark Sommers, and drummer George Fludas. This is the same group (minus Adams) that appeared on the saxophonist’s acclaimed 2010 Origin Records release, African Flowers, which itself was influenced by the Weston/Liston recordings.

“I loved the way their music tied a lot of things together: African music and Duke Ellington and bebop harmony and the extreme use of dissonance, which in Liston’s hands could suggest Stravinsky,” says Bradfield. “Their music transcended craft. They created a path from one form of music, and one aspect of culture, to the other. They showed you how everything fit together.”

The movements trace the musical arc of Liston’s life, from “Kansas City Child” and “Central Avenue” to “Dizzy Gillespie,” “Randy Weston,” “Detroit/Kingston,” and “Homecoming.” Closing out the CD, vocalist Maggie Burrell delivers a majestic version of “Let me not lose this dream,” with text by Harlem Renaissance poet Georgia Douglas Johnson and piano-bass accompaniment.

Perhaps in part because she was so private, Liston is not as familiar to average listeners as other great jazz arrangers of her era such as Gil Evans and Oliver Nelson. Bradfield hopes to help change that with Melba!, which illuminates what a remarkable individual she was in achieving such success as a woman in a man’s world and as a bold innovator with her own style and methodology.

“Through the course of six carefully composed movements,” wrote Howard Reich in his Chicago Tribune review of the septet’s September 2012 Green Mill performance, “Melba! evoked the spirit of Liston’s times but still carried the hallmarks of Bradfield’s musical language. The long lines, complex themes and meticulous structuring of this score pointed to the high craft of Bradfield’s writing.”

The premiere of Melba! capped a banner year for Bradfield. One of a handful of saxophonists who brings the same intensity and edgy power to soprano as he does to tenor, he contributed memorable performances on both horns to standout albums by three of the Windy City’s finest: bassist Marlene Rosenberg, trumpeter Tito Carrillo, and guitarist John Moulder. He also produced singer Rebecca Sullivan’s well-received debut, This Way, This Time.

The 42-year-old Houston native, who last year was named an assistant professor of saxophone and jazz studies at Northern Illinois University, continues the pace in 2013 with several projects. A new recording by Ba(SH), Bradfield’s collective trio with Clark Sommers and drummer Dana Hall, will be released by Origin this summer. He plays bass clarinet on the third album by bassist and rising star Matt Ulery’s Loom, out on Dave Douglas’s Greenleaf label in June. Bradfield also contributes to forthcoming releases by Ryan Cohan (Motéma) and Dana Hall (Origin).

With the CD release imminent, Melba! continues to occupy much of Bradfield’s attention. He and his septet will perform the suite at the Green Mill 6/1 as well as later this summer at the Chicago Jazz Festival, which will present him at the Pritzker Pavilion in Millennium Park 8/30 as part of a triple bill (with Wadada Leo Smith and Charles Lloyd).

“I feel very fortunate to write for and perform with all of the musicians on this recording, each of whom brings a very personal voice to the group,” Bradfield wrote in his CD notes. “Their creative input along the way transformed the dots and lines on the sterile page, bringing Melba! to life”—and Liston’s soulful legacy to the fore.