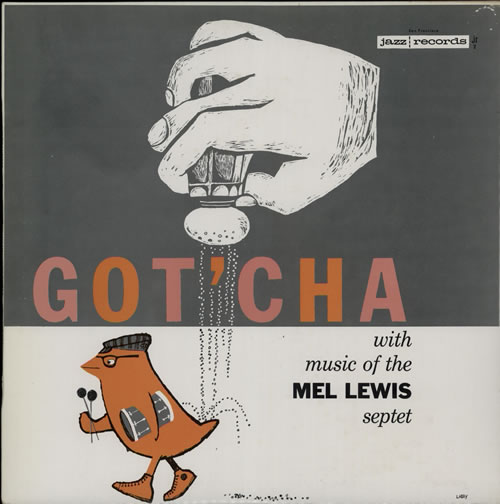 Yesterday I told you about Trigger Alpert's fabulous first leadership album in October 1956. Today, it's drummer Mel Lewis's turn. His first album under his own name was Got'cha, recorded for the San Francisco Jazz label in November 1956. Prior to '56, drummer Lewis was a big-band guy, starting with Ray Anthony's band in 1949. He then moved on to Tex Beneke in '51, back to Anthony from '53 to the summer of '54 before joining Stan Kenton in September of that year. [Pictured above, a young Mel Lewis in Bernie Burns' band in 1946]

While with Kenton, Lewis was on a bunch of small-group albums led by Pete Jolly, Herb Geller, Hampton Hawes, Bud Shank, Charlie Mariano, Bob Brookmeyer, Stu Williamson, Bill Perkins and others. In October 1956, Lewis began planning to bring a group together, which he did. Except when it was time to record, the arrangements weren't completed yet. Then Bill Perkins was injured in a bar altercation, which nearly nixed the date. From his hospital bed, Perkins finished his charts and the septet rehearsed. But it still needed a replacement for Perkins on tenor sax. Jerry Coker, who had just joined Kenton, replaced Perkins.

The septet Lewis assembled consisted of  Ed Leddy (tp) Jerry Coker and Richie Kamuca (ts) Pepper Adams (bar) John Marabuto (p) Dean Reilly (b) Mel Lewis (d). Except for Marabuto and Reilly, who were Bay Area stalwarts, the rest were Kentonites. Got'cha was recorded at the Sands Ballroom in San Francisco, and the session ran from noon until the early hours of the next morning. Part of the problem was an out-of-tune piano that refused to stay in tune. Arrangements were by Perkins, Lennie Niehaus, Coker, Adams and Marabuto. All of the material is straight-ahead, with several major swingers. Lennie Niehaus's One for Pat features a grand Pepper Adams solo and Coker's 'Enry 'Iggins 'Ead is magnificent. [Pictured above, John Marabuto]

The songs and arrangers:

Mel Lewis turned out to be a superb leader on his first session and kept magnetic time, driving the beat with a light but firm touch. Lewis died in 1990.

JazzWax tracks: Sadly, Mel Lewis' Got'cha is out of print, but you can find a copy on CD here or at eBay.

Here's Bill Perkins's arrangement of Duke Ellington's In a Mellowtone...