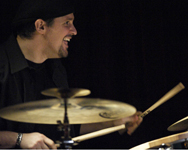 slideshow
Drummers Mike Donahue, Mauricio Zottarelli and percussionist Marcus Santos join forces on Tuesday May 1st, 2012 for an evening of music, drumming and to raise funds to a great cause

Fellow artists Mike Donahue, Mauricio Zottarelli and Marcus Santos will join forces on May 1st, 2012 in a performance/drum clinic to raise funds for the NJ Make a Wish Foundation. The show will take place on May 1st at the Sam Ash music store in Edison (1831 Rt. 27 Edison, NJ, 732-572- 5595), at 7pm. The event will feature the three musicians performing individually and collectively, showcasing a diverse and multicultural array of drumming styles, music, and artistry. Their extensive experience in the music scene, as performers and educators, will surely make this clinic a memorable musical night, fun for the whole family, and will benefit one of the most admired and well-know charities in the world.

Since 1980, the Make-A-Wish Foundation has enriched the lives of children with life-threatening medical conditions through its wish-granting work. The Foundation's mission reflects the life-changing impact that a Make-A-Wish® experience has on children, families, referral sources, donors, sponsors and entire communities. Since its humble beginnings, the organization has blossomed into a worldwide phenomenon, reaching more than 250,000 children around the world.

Mike Donahue has been playing the drums for over 20 years. He has studied with Top Rated NYC drummer Ray Marchia and jazz drumming legend Joe Morello. Mike plays and records throughout New York and New Jersey and is looked at as a diverse and solid performer. His instructional methods & techniques have also made him a successful drum instructor. His musical experience has taken him through practically every musical genre and Mike continues to define himself as a drummer and explore the endless creative outlets in the world of music. Mike actively works with schools, camps and organizations that can benefit from his free drum clinic “Chasing Your Dreams 1 Beat At A Time”. Mike also holds charity drum clinics to raise money for great causes.

Brazilian born, New York City-based drummer/composer Mauricio Zottarelli has been on the forefront of the Jazz, Latin and Brazilian music scenes for years. Coming from a musical family, Mauricio is a critically acclaimed and award- winning drummer and artist. He is credited in more than 70 albums so far in his career, and has worked with dozens of the most important and notable artists of today, crossing over many musical styles. Some of them are: Hiromi, Dig Trio, Eliane Elias, Marc Johnson, Prasanna, Esperanza Spalding, Keiko Matsui, Richard Bona, Cláudio Roditi, Joe Locke, Geoffrey Keezer, Mike Pope, Ivan Lins, Carmen Souza, Chuck Loeb, Rosa Passos, Dom Salvador, Jovino Santos Neto, Nilson Matta, Toninho Horta, Filó Machado, Cidinho Teixeira group, Gustavo Assis Brasil, Marc Rossi Group, Hendrik Meurkens, Oriente Lopez and many others. He also has an active career as an educator, teaching in the NYC area, performing workshops/clinics and as a regular columnist for Modern Drummer Magazine in Brazil.

A contemporary percussionist and educator, Marcus Santos, is a native of Bahia, Brazil.He commits his life to the study, teaching and performance of his hometown's Afro-Brazilian music and heritage. Marcus won a scholarship to Berklee College of Music where he completed his studies with honors. Santos has performed internationally and has shared the stage with artists such as Paquito D'Rivera, The Brand New Heavies, Orchestra La Passion and the Gipsy Kings. The Brazilian Immigrant Center honored him with the ‘Outstanding Arts Performer’ award in 2008 and Berklee College of Music has awarded him as ‘Outstanding Percussionist' in 2004. Santos has released a successful DVD, “Modern Approach to Pandeiro”, and has led numerous workshops on Afro-Brazilian percussion and music for Social Change in universities and conventions around the world, including MIT, Harvard, Brown University, Universidad Central de Venezuela and PASIC. Apart from his busy performing and teaching schedules, Santos is artistic director of drumming groups in six different states in the US.

The May 1st Drum clinic is free and open to all ages. Donations to the Make a Wish Foundation are strongly encouraged, and the artists will be raffling giveaways for the attendees who contribute with the Make A Wish Foundation.