SOURCE: CHC NETWORK
April 9, 2010
Sign in to view read count
Mavis Staples and Booker T. will be performing at The Climate Rally, taking place on The National Mall in Washington, DC on Sunday, April 25, 2010, in conjunction with the 40th Anniversary of Earth Day.

The event calls on Congress to pass an effective and equitable climate and clean energy bill in 2010. It will include speeches, live music and eco-village exhibits, capping off nine days of service projects, advocacy events, performance arts and exhibits organized by Earth Day Network. 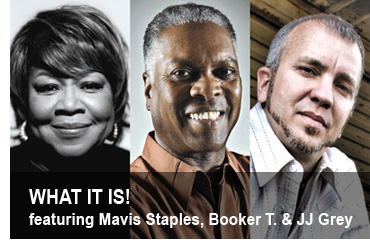 Mavis and Booker have recently been Co-headlining a historic touring package entitled What It Is! featuring Mavis Staples, Booker T. & JJ Grey.

Mavis will be playing The Kennedy Center 2 days prior to the National Mall event, on April 23. She will be performing at multiple festivals over the Summer.

Booker has upcoming Spring shows in Brazil, England and Ireland as well as dates in the U.S.

Watch for new music from Booker and Mavis later this year and catch them both on tour in the meantime, please see Mavis Staples tour dates and Booker Ts tour dates.