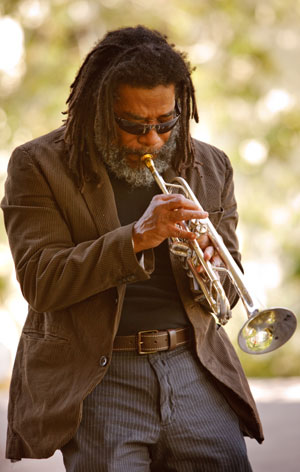 Hailed as “one of the most vital musicians on the planet today" (Bill Shoemaker, Coda), legendary composer, multi-instrumentalist, improviser and educator Ishmael Wadada Leo Smith has been active in creative contemporary music for over forty years. He is creator of Ankhrasmation, a systemic music language, and his music traverses traditions as diverse as the delta blues, creative world musics, American experimentalism and live-electronics. His current ensembles include the Golden Quartet (currently with Vijay Iyer, John Lindberg and Pheeroan akLaff), Silver Orchestra (with J.D. Parran, Lindberg, Okkyung Lee, Harris Eisenstadt and others), Organic (with Nels Cline, Lee, Lindberg, akLaff and others), and his compositions have been performed by ensembles including the Kronos Quartet, Da Capo Chamber Player, New Century Players, San Francisco Contemporary Music Players, Del Sol String Quartet and New York New Music Ensemble. He is faculty member, and director of the African-American Improvisational Music program, at The Herb Alpert School of Music at the California Institute of the Arts, a Guggenheim Fellow, and a longtime member of the Association for the Advancement of Creative Musicians.

Mathilde 253 consists of the pioneering avant-rock drummer Charles Hayward (This Heat, Camberwell Now, Massacre), rising Cork-based guitarist and improviser Han-earl Park (Paul Dunmall, Kato Hideki, Stet Lab), and Irish trumpeter and mainstay of the London improvised music scene, Ian Smith (Derek Bailey, The London Improvisers Orchestra, The Gathering). Mathilde 253 was formed to explore the spontaneous mashup of avant-rock, African-American creative musics, European free improvisation and noise, and collaborates with noted improvisers such as Lol Coxhill and Pat Thomas. Guillaume Belhomme described the music of the ensemble's eponymous debut CD, released in 2011 by Slam Productions (SLAMCD 528), as “ordered and entwining... a tapestry of choice: that of another Mathilde, of a complete beauty."

The Dublin event will open with a solo performance by the Dublin-based Paul G. Smyth, one of Ireland's foremost free-improvising pianist.

Ishmael Wadada Leo Smith will also speak on 'Ankhrasmation: A Systemic Music Language for Creative Music' as part of the UCC Music Research Seminar Series. The talk is free, open to the public, and takes place at the UCC Music Building (Sundays Well, Cork) at 2:00 pm on 30 March.

Presented with funding from the Music Network Performance and Touring Award, and support from UCC School of Music, Note Productions, the National Concert Hall and the Cork Opera House.

Presented with funding from the Music Network Performance and Touring Award, and support from UCC School of Music and the Cork Opera House.

Presented with funding from the Music Network Performance and Touring Award, and support from Note Productions and the National Concert Hall.