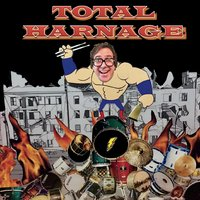 slideshow
When Jason Harnell was six years old, his father, Grammy winning composer and arranger Joe Harnell, invited Louie Bellson to their house to hear the budding prodigy play. After playing a 15-minute solo, the legendary drummer handed the sticks to Jason and said, “Your turn.” When Jason finished, an impressed Bellson gave the boy his drum set – replacing the toy kits he had used up till that point. As a world-renowned jazz drummer, educator, composer and bandleader ensembling with countless greats over a 30-plus year career, Jason has played thousands of soul-transporting solos since. Yet he’s never jammed as cleverly, adventurously and “out there” as he does on a new recording and multi-media experience whose title speaks to its intricate, fascinating craft as much as his massive personality: Total Harnage.

Taking the traditional concept of a “drum solo” to unprecedented, otherworldly levels, the 12 track/12 video clip collection finds the multi-talented musician unleashed from all traditional, contemporary and jazz fusion configurations of his past and embracing a fresh, experimental and groundbreaking future for the art of drumming and the possibilities of percussion. As the names of his popular hard-gigging L.A. based ensembles—Joe-LeSs ShOE, 3-ish, Sigmund Fudge and GO SHLOMO!—might indicate, Jason has always enjoyed bringing a sense of humor to a genre that’s often quite serious (“I prefer sincere to serious,” he says). On Total Harnage, he ups the comedic ante while incorporating elements of so many things he loves in life- including classic films, superheroes, classical music, Indian music, ambient electronica and abstract art.

Jason’s evolution into performing solo drum concerts for the first time in his career started unexpectedly in 2017 at the infamous Oyster House Saloon in Studio City, CA. After another burning, improvisation-rich trio gig with saxophonist Bob Sheppard, the charismatic bartender/manager Christopher—a huge fan of Jason’s—asked if he would be interested in doing a solo drum concert. Shocked and reluctant at first, Jason quickly realized this was the universe offering him a plum opportunity. The Jason Harnell Solo Drum Experience was born, incorporating a full range of what he calls “sonic delicacies,” including drums, vocals, loops, apps and effects.

Recorded at fBoo Music in Burbank, Total Harnage is a fanciful, joyfully schizophrenic gathering of his favorite pieces from the wealth of material Jason amassed for his solo gigs. He performed two of them at his very first show – “Sara Song,” a soulful and dreamy homage to his wife and best friend of over 31 years (since high school!), featuring Jason’s passionate vocals and subtle cymbal and drums; and “Bloom,” a trippy and hypnotic flow of atmospheric coolness, with the drummer creating highs, lows and offbeat patterns over beautiful textures and ambient soundscapes of the Brian Eno co-created audiovisual app Bloom.

True to its title, the opening track “Trance”— originally written for GO SHLOMO!, Jason’s duo project with Adam Benjamin- is a meditative, polyrhythmic homage to Indian tabla master Zakir Hussain fusing Eastern percussion and Western jazz influences while using a raaga consisting of 27 beats to create a 27/4 meter. “Jaws” is the first movie the drummer ever saw and is an all-time favorite. He pays tribute to his childhood shark obsession with “Bad Fish,” completely improvised drum sketches performed as accents to Quint the Shark Hunter’s (Robert Shaw) speech in the town meeting room. Jason taps into his classical influences on two of the project’s more tuneful tracks, Bach’s “Prelude and Fugue No. 2 in C Minor,” featuring master concert pianist Glenn Gould; and and the mystical and ambient “The Magic Circle of Infinity,” a modern classical composition by American composer George Crumb.

Blending his throaty lead vocals with backing drone voicings, he wrote the beautifully melodic “Lullaby” as a universal message of peace out on a hike one day in Southern California. The quirky and hilarious “Captain Amazing Saves the World” finds the drummer in Rod Serling mode, narrating (with subtle drum backing) a colorful tale comparing superheroes to jazz musicians “with powers and abilities not of this world.” “Thirty Eight” is an original abstract solo drum composition with several movements, each featuring a different sonic template/textural landscape. He wrote a graphic score and drew shapes reflecting the sound after his first live performance of the piece. The title refers to the number of notes played in the repeated rhythmic motive.

Starting with a wild Al Jarreau-like scat percussion vocal and building towards a powerful interaction between that vibe and soaring sung vocals, “What Thing”— featuring only Jason’s voice and no skins- is an original composition in 11/4 loosely based on Cole Porter’s “What is This Thing Called Love.” The most spot-on thing we can say about Jason’s take on “Moon River” is that nobody – not Henry Mancini, not Audrey Hepburn, not the millions of fans that have made it one of the most beloved songs of all time— have heard a version this haunting, sparse and esoteric. With “When You’re Smiling,” Jason takes a catchy 90 year old song and throws the sonic kitchen sink at it, creating a freewheeling synthesis of sounds that includes a purple toy drum set, gramophone style vocals, yodeling, fireworks, a few chickens, a bit of Ricky Gervais and a massive gong, among other things!

Reflective of its unique creative vibe and audiovisual presentation, Total Harnage is being sold (thus far) via Jason’s website in two different formats—LP (so the colorful album artwork can “pop” better) and as a USB flash drive shaped like a cassette that contains the music and all of the accompanying videos (several are already up on YouTube).

Total Harnage was released on September 20, 2019 and is available at iTunes, Amazon and online everywhere.