SOURCE: ALL ABOUT JAZZ PUBLICITY
June 7, 2008
Sign in to view read count 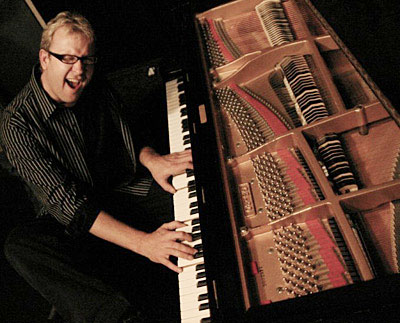 Rob's master class will draw on materials that he has perfected during his 30 year musical career. Topics will include: producing your own commercially viable CD, contemporary song writing in any style, practicing to be your best, how to promote your band, and how to have success in the music business.

At age 16, Rob Mullins toured with vocalist Dianne Reeves (Blue Note Records) to several national jazz festivals where he was proclaimed a musical genius by jazz composer Oliver Nelson. Rob also directed his high school big band and then went on to study at the University of Northern Colorado on a percussion scholarship, where he starred in the top three jazz bands on piano, drums, and baritone sax respectively. Rob studied theory and composition from George Russell (music theory guru to Miles Davis and John Coltrane) in New York on a National Endowment for the Arts Grant. After his time with George Russell, he went on to start his recording career as a jazz pianist and has now recorded 16 solo albums spanning three decades.

Rob's work with Individual Students: All of Rob's private students develop material to record a full CD of music. Rob brings professional musicians into the recording studio to work with the student in recording sessions. Rob, as producer, works with the student from conception to finished product, giving the student insight and knowledge about the creation of a commercially viable music CD. Recent graduates of the Rob Mullins Student2Artist Program are Jonathan Blake-singer/songwriter, Sarah Ingraham-world beat fusion artist, Brett Shurman-rock singer, Mario Tse-jazz pianist. Singer-songwriters receive considerable acclaim in the music industry today, as the public enjoys and now demands authenticity in music. Vocalists wishing to have an edge in this highly competitive arena require skills beyond their voices to work with instrumentalists and to write their own material. Rob evaluates the students' musical abilities, and presents ideas to improve their vocal and instrumental skills. The vocalist learns methods for self-accompaniment on the piano and/or guitar, charting music, transposing, and various piano styles. For any musical style, topics covered include hit artist studies, song structure, composition and arrangements. Rob's understanding of jazz and classical music led to teaching music teachers at Pedrini Music, Yamaha Music School, MTAC workshops, clinics and workshops in New York, Moscow, Tokyo, Los Angeles, and other cities. He now runs the top private Jazz Studies and Singer/Songwriter Private lessons Programs in Los Angeles while continuing his other careers as a recording artist, book author, live performer, session musician and public speaker.

To read what Rob's students have to say about him go to: planetmullins.com/

For more information about this multi-faceted musical artist: planetmullins.com