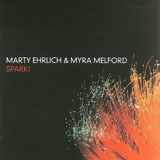 On Friday, October 26th, the long-standing duo of reed player/composer Marty Ehrlich and pianist/composer Myra Melford will perform at New Haven's Firehouse 12 in support of its new CD, Spark! (Palmetto Records). This is the second release by this pairing of acclaimed veteran talents, who have been performed together as a duo since 2000. Critics called their 2001 debut, Yet Can Spring (Arabesque Recordings), “revelatory" (David R. Adler, All Music Guide) and “the ultimate duet recording...another triumph for two outstanding musicians" (Ron Wynn, JazzTimes).

Equally fluent on clarinet, saxophone and flute, Ehrlich has been hailed by critics as “one of the most formidable multi-instrumentalists since Eric Dolphy" (Village Voice), “one of the premier melodicists of his generation" (New York Times) and “one of the important jazz composers and creative improvisers in New York" (JazzTimes). His extensive discography, which exceeds 125 recordings, includes more than 20 titles as a leader/co-leader, as well as sideman work with Muhal Richard Abrams, Anthony Braxton, John Carter, Thomas Chapin, Andrew Hill, Julius Hemphill, Mario Pavone, George Russell and John Zorn among many others. As a composer, Ehrlich earned a 2004 Guggenheim Foundation Fellowship and has been commissioned by a variety of prominent jazz and new music ensembles. His latest CD is News on the Rail (Palmetto Records).

“Melford's improvising and composing is rich in allusions to the music of India and Eastern Europe, as well as gospel and the blues," wrote Jazziz reviewer Ed Hazell, “but places them in an utterly contemporary and idiosyncratic context." She has recorded more than a dozen recordings as a leader/co-leader, performed in more than 30 countries and earned numerous awards, including a Fulbright Scholarship to study the harmonium (a traditional pump organ) with Sohanlal Sharma in Calcutta, India. She has also studied with Gary Peacock, Don Pullen and Henry Threadgill and recorded with Leroy Jenkins, Joseph Jarman and Butch Morris among others. Melford is an Assistant Professor of Improvisation and Jazz at the University of California at Berkeley and the recipient of multiple commissions to compose for her own bands, collaborative projects and dance groups. Her latest release is The Image of Your Body (Cryptogramophone).