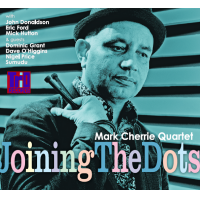 ‘"A great musician in his own right and a great steel pannist." –Jazz FM

From the artist himself: “My earliest memories of the steel pan were watching my father playing with the Russ Henderson Trio. Russ and my father (Ralph Cherrie) had arrived in the UK from Trinidad in the mid 1950's and quickly found that they could make a good living playing the steel pan over here. They were both accomplished musicians; Russ was a well knownpiano player in Trinidad and my father not only played the piano too but also the double bass and the electric bass. Together with Sterling Betancourt ondrums, they played many of the society engagements of the day, flitting between playing conventional instruments, as well as their steel pans. And of course, taking to the streets of Notting Hill in 1964, with pans around their necks, they effectively forged the beginning of the Notting Hill carnival.

Whilst playing the steel pan professionally for well over 40 years myself, I played keyboards professionally as well, working with many different artists such as Jimmy Ruffin, Edwin Starr, The Drifters and many others. I also began a career writing music for TV and film in 1993 and have been fortunate enough to have music featured on programmes like E.R., The Fresh Prince, Buffy, Friends and literally 100s of others.

Flash-forward to the present time and the steel pan is now a widely known instrument, both here and all over the world. But still, the perception of the instrument isstill one of novelty. I still have to field questions like: “Does it play real musical notes?” and even “Do you just play by numbers?”. The reasons for this are several, in my opinion. Firstly, although the instrument is taught extensively in schools, a lot of the time the teachers teaching it do not necessarily have a firm foundation in music theory either and I have seen at first hand many different ways of notating for the instrument in school which remarkably don’t seem to utilise the conventional stave. Secondly many of the schools themselves don’t see the steel pan as a serious instrument like the piano or the guitar, for instance, but as something musical and fun and a quick way of ticking an ethnic diversity box whilst providing some ethnically conscious entertainment at the end of term. Maybe graded exams might help to make the steel pan be viewed more seriously? Then of course, there is very little of the instrument itself heard outside of it’s expected Caribbean setting.”

About Joining The Dots

“I decided to record a jazz album with musicians that are well known on the UK jazz circuit, where the music was deliberately not at all Caribbean. All the band tracks were recorded all together in the studio live room in one day, in fact between 12 noon and 6pm. The second day was reserved for overdubs, i.e. saxophone, acoustic and electric guitars and voice. I mixed the album myself, in my own studio and then it was professionally mastered. I believe that there is no other album out there that attempts to cover the musical area that I have done with this one. Hopefully, there will be some people out there that will want to hear it!”