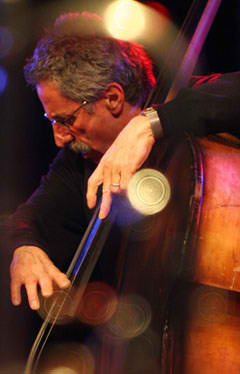 “Honestly, it felt remarkably similar to our work together 40 years ago," recalls Pavone, who toured with Bley-led trios in the late 1960's and early 1970's with drummers Barry Altschul and Laurence Cook. “The piano trio format made the most sense for this reunion and when I envisioned the music the three of us would create, I could hear Matt. I think he went to some fresh and innovative places, as did we all. There is a sound in this recording that harkens back to an earlier time."

Trio Arc brings Pavone's career full circle on a number of fronts. In addition to reconnecting with Bley, this is the first completely improvised recording under Pavone's leadership, referencing the freely improvised music he played early in his career rather than the trademark “upside-down" compositions he has cultivated exclusively for the past decade. It's also his first trio recording since 1999's Remembering Thomas (Knitting Factory), marking his long-awaited return to the format that first gained him widespread recognition on recordings by iconic figures such as Bill Dixon (1980's) and Thomas Chapin (1990-97).

Critics note that Pavone “continues to move the tradition forward with every record" (John Kelman, AllAboutJazz.com), calling his work “intense and absorbing" (Kenny Mathieson, Jazzwise), “exciting and stimulating" (Jay Collins, Cadence), “never less than compelling" (Ben Ratliff, New York Times) and “both joyous and serious, abrasive and complex, yet entirely inviting" (David R. Adler, All Music Guide). The Absolute Sound's Fred Kaplan adds, “Pavone's music is in constant flux and flow, flying along the outer edge of the envelope but never losing its grip on the basics."

Originally an engineer by trade, Pavone dropped everything to attend John Coltrane's funeral in 1967, where he decided on the spot to dedicate the rest of his life to music. He has since spent the last four decades defining the cutting edge of jazz, both as a sideman to legendary innovators and the leader of groups featuring some of today's most respected young improvisers. Since Chapin's untimely death in 1998, Pavone has focused on his own bands, which have featured a cadre of prominent sidemen including Steven Bernstein, Charles Burnham, Gerald Cleaver, Peter Madsen, Tony Malaby and Michael Sarin among others.

Trio Arc is his 18th recording as a leader/co-leader, and his seventh on the Playscape Recordings label that has been his home since 2001. The label will also release Pavone's forthcoming quintet CD, Ancestors, in November.