SOURCE: ALL ABOUT JAZZ PUBLICITY
June 3, 2009
Sign in to view read count 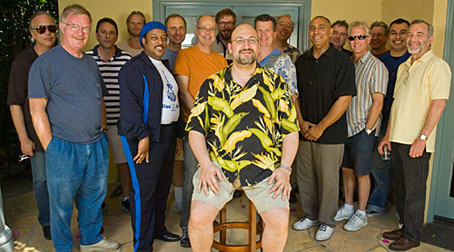 Some may call it hubris to introduce Marian Petrescu with an album in which he is asked to step into the shoes of a uniquely accomplished and intimidating virtuoso.

But that assumption evaporates in an instant, once the music of Resonance Big Band Plays the Legacy of Oscar Peterson begins.

That's all it takes to make clear that this remarkable album is inspired not by bravado but by Petrescu's respect and even love for the artist he credits with inspiring his commitment to jazz.

More to the point, it pays tribute by exemplifying what it means for one artist to influence another, as Petrescu follows Peterson's example by combining the highest order of technique and musicianship into a sound that is all his own.

This standard is set on the opening track, the Peterson composition “Waltzing Is Hip,” a blaze of big band brass and keyboard wizardry that impresses equally through chops and taste. Petrescu then delivers with the same authority in a variety of settings, through the intimacies of “Little Girl Blue,” the alternately reverent and ecstatic medley of “Hymn to Freedom” and “John Brown's Body,” a triumphant re-examination of Peterson's “West Side Story” arrangement, and finally on solo piano with a Peterson gem, “A Little Jazz Exercise,” whose modest title slyly belies its devilish difficulty.

For Petrescu, the seeds for this project were planted as far back as the notion to play jazz at all. Born in 1970, he received a thorough musical education, beginning with piano lessons at age 4 in his hometown of Bucharest, Romania. Just two years later, he happened to catch a performance by Peterson on television. With that, the door opened through which Petrescu would pursue classical and jazz studies in Sweden and subsequently at the Sibelius Academy in Helsinki, Finland.

By age 15, Petrescu was playing formidably enough to debut at the Pori Jazz Festival. At the same event two years later, he would witness a performance by Peterson, an experience that he remembers as “one of the greatest musical moments of my life.”

Though he drew deeply from the work of Art Tatum, Kenny Barron, Chick Corea, Herbie Hancock, Michel Petrucciani and many other pianists, Petrescu has always held a special regard for Peterson. “To me, the most important aspects of Oscar's style are the beauty of the sound he gets and the way he phrases,” he says. “People may feel that Oscar was just a great swinging technician on the keyboard, but he was far more than that. He was one of the greatest pianists to play the instrument, and his ballad playing and chord selections were just as brilliant as his up-tempo burning.”

Petrescu's ascension can be measured by the second prize he received at the Martial Solal International Jazz Piano Competition in Paris (1989), his first-prize finish at the Bucharest Masters of Jazz Festival (1992), and engagements throughout Europe as a solo artist, as leader of his own trio, and onstage with Tony Williams, Arturo Sandoval, Toots Thielemans, Al Jarreau, Didier Lockwood and many other luminaries of jazz. His concerts mixed originals, highlights from the American songbook, and on one show with his trio and vocalist Johanna Iivanainen, a thematic program prophetically titled “An Evening with Ella Fitzgerald and Oscar Peterson.”

George Klabin was among the first American jazz insiders to get hip to Petrescu. As president of Resonance Records as well as a lifelong Peterson enthusiast, Klabin put the pieces together for an album that would celebrate the complete artistry of Peterson, the composer as well as the virtuoso--and having already recorded Petrescu on a session for guitarist Andreas Oberg in 2006, he knew that no musician was better equipped to honor Peterson on this project.

“I had no hesitation at all when George asked me to make this recording with him,” Petrescu says. “I just looked at it as a great honor and an exciting opportunity to perform music that has been an important part of my life. I was already familiar with many of the tunes selected, and I was confident I could bring my own interpretation to them while maintaining Oscar's pianistic approach and his incredible vitality and passion.”

The repertoire was chosen, and the arrangements assigned, by Klabin, whose preparations were exacting as well as inspired. Most of the charts were divvied between two young giants: L.A.-based Bill Cunliffe, whose work has written for performers such as Buddy Rich, Marian McPartland, and his own big band, and Germany's Kuno Schmid, an award-winning composer and arranger. Both have also established themselves outstanding pianists and group leaders, all of which equip them with unique insight into the challenges posed by this project.

But Klabin reached back to more established talent for one special track. Remembering Peterson's treatment of the Henry Mancini tune “Sally's Tomato” on a German release from the late Sixties titled Motions and Emotions, he tracked down the original arranger, Claus Ogerman, who promptly sent his hand-written charts for Klabin to use on the new album.

Similarly, Klabin lined up an Olympian assembly of L.A.-based players to comprise the Resonance Big Band and a smaller ensemble for chamber strings, with Oberg, Petrescu's longtime friend and now a Resonance artist, added to the mix as a perfect final ingredient.

For Petrescu, the initial stages involved studying transcriptions of Peterson's intros to some of the material. “George's idea was that I would play these transcriptions for the first sections on some pieces and then improvise from there on out,” Petrescu says. “I spent a lot of time learning them and in the process I became very comfortable with the song structure. It greatly helped my understanding of Oscar's approach.”

An especially illuminating moment comes with the intimate treatment given to “Little Girl Blue.” “George specifically wanted me to reproduce Oscar's ballad approach here, since he feels that Oscar's interpretation was one of those magical moments where the improvisation becomes a sort of 'standard' itself,” Petrescu notes. “The string quartet arrangement was written to 'surround' the piano lines and enhance the mood and colors.”

Their approach here and throughout much of this album intentionally widens the focus beyond the dominant perception of Peterson as a pianist first, foremost, or even exclusively. “Oscar ranks among the best jazz composers, in my opinion,” Petrescu says. “His compositions are truly interesting and creative, with many classical influences and also a lot of blues. This CD will show many of his best tunes in exciting and creative new arrangements.”

That it does, but it also marks a landmark event in jazz history - a passing of one of the music's brightest torches, handed to Peterson years ago by his mentor Art Tatum and offered now to a most worthy successor. Martial Solal has already hailed this young dynamo as “the Horowitz of jazz piano, and through his Resonance debut the case is made that at some future date a new giant in this genre will receive the strongest accolade, as the Marian Petrescu of his or her time.