SOURCE: ALL ABOUT JAZZ @ SPINNER
September 24, 2010
Sign in to view read count 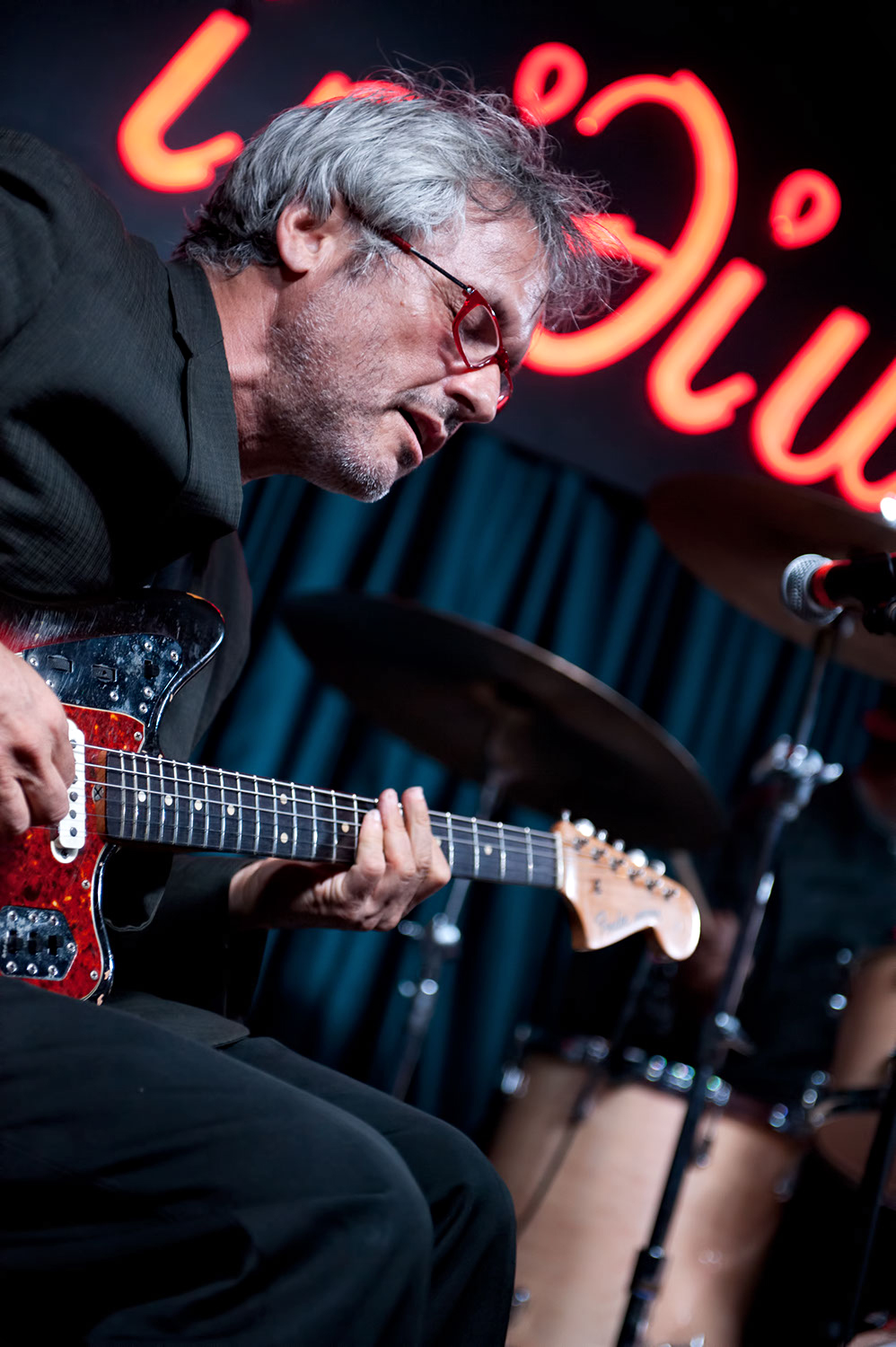 slideshow
There are few musicians that have worked in a wider and more creative catalog of material than Marc Ribot. As a sideman, the guitarist has backed singers including Tom Waits, Alison Krauss and Robert Plant, Richard Hell, Elvis Costello and Norah Jones, not to mention John Zorn and vast array of avant-garde jazz musicians. His own material tends to be wildly eclectic: He's probably the only person who will ever record an Albert Ayler tribute for solo guitar for Atlantic Records, and he's also delved into Cuban music, bebop, avant-garde, minimalism and just about everything else.

His recent output remains unpredictable with 2009's 'Ceramic Dog' being an aggressive power-trio effort firmly in the rock vein. Now he returns with an excellent new album titled 'Silent Movies.' Here Ribot pulls a 180 from his previous album, offering up soft, nuanced solo pieces that are meant as movie scores, some that according to the liner notes “never existed outside my head." It shows yet another facet to one of today's great players. I recently caught up with Ribot to get the lowdown on the new album, being a sideman and what's it like to be a guitarists' guitarist.

The new one is certainly different from 'Ceramic Dog.' Was that a conscious effort?

No. For me they are part of different practices. I live in a co-op with thin walls [chuckles], so I don't jam out on electric guitar when I'm home. I play acoustic guitar, and after years of doing that I like it. So 'Ceramic Dog' and the other electric bands I do represent what I do when I have my hands on an amplifier, and 'Silent Movies' represents a different kind of practice.

Ostensibly, you created background music here, but obviously it's more than that.

I generally try to make things work on a couple of different levels. I hope that it can stand up to a close listen, as well, but, yeah, I like that it can be in the background. Sometimes film music is in the foreground, but usually it isn't. I'm not like Aaron Copland where “this is the part for when the sun is rising," but in a loose way it can work that way. I didn't write it as background music, but I'm happy that it can work that way as well.

Yeah I've done a lot of film scores over the years. The peculiarities of the union or whatever means that if you provide sandwiches for the set you get a credit, but if you played on the score you don't necessarily get one.

Why perform this as a solo thing instead of with an orchestra or band?

I've already done two filmwork CDs that are just as you described, 'Filmworks 1' and 'Filmworks 2,' out on Tzadik. I wanted to continue working with some of the themes that I wrote for guitar because that's what I do, I play guitar. I compose by playing guitar. I was enjoying playing them as pieces.

This music here is probably some of your most accessible and melodic material.

One of the reasons I like to write for film is because it's an excuse to engage in a kind of lyricism that is outside what I normally do as an artist. It gave me a license that I normally wouldn't feel like doing. This begs the question: Why don't I play like that normally? I started out playing classical guitar and studying with Frantz Casseus, but by the time I was 15 all I wanted to do was rock out. If you look at the music that my generation has made, there is a certain distance to lyricism. For example, Philip Glass and Steve Reich have lyrical elements in their work, but these are subsumed in this formalist concept. They can be lyrical as long as the concept is minimalist. Hardcore punk doesn't have a lot of lyricism.

Is there an answer to your question?

I wasn't trying to be clever or ironic. It's just what I needed to hear. Writing for film is different. It's not about what I need. It's about what the film needs. It provides me with a certain amount of license that's different than whatever a band would play live. Then when I recorded one of these pieces, I realized that I had broken one of my own taboos about lyricism, which is good.

So this is your bedroom album, so to speak.

Well, it was recorded in studio but if you saw my bedroom you would have to look real hard to find a bed.

This was recorded over three days. Your background is more toward improvisation and there were few overdubs on this. What did you do in the studio for three days?

If you've ever been to a studio, you know that it is incredibly boring if you aren't the one actually working. If you are the one, then time seems to fly by. What I did is a number of performances. When I play solo, I don't work on it in a very methodical way. I find that if you spend one day or three days or three months, you keep playing and you keep playing, and then at some point the record almost happens in real time—this is true even with a rock band&#151and you better hope that the tape machine is on. Then you go back and realize that you won't use everything from that moment, but you have the heart of it where four or five tunes come out of it. That's how this was done.

Did you bring in video to work from?

No, no. This music has to do with space and spaciality, but I wasn't watching films. Music can have its own images, its own space. Improvisers talk about music having shapes. Music has sound waves, yet we think of it as having shapes. So it's imagining that something is happening in time is actually happening in space. The two are interchangeable in an interesting and unpredictable way.

What's the appeal of performing solo?

There are a huge number of guitarists in your fanbase. How do you feel about being a guitarists' guitarist?

I've tried to cultivate relationships over the years with people who are not musicians [laughs], but God bless every single one of my fans, guitarist or not [laughs]. Seriously, I've been lucky enough to play on a few records that people have dug, and I've tried to not repeat the same things too often, and all I can say is I'm glad if other guitarists like it.

Do you enjoy your sideman work?

I'm very comfortable as a side musician. For all I know, if I'm standing at the pearly gates and it's my work as a sideman that gets me in, that's fine with me. I've been very lucky to work with some great bandleaders and producers—Tom Waits, John Zorn, T Bone Burnett, Elvis Costello. I'm very lucky.

What's the difference in your approach as a sideman versus your own music?

When I'm working as a side musician, I'm trying to realize someone else's artistic vision. Actually, it's not that passive: I'm trying to make someone else's artistic vision make sense. In my opinion, in order for it to make sense I have to critique or contradict it using my guitar. So it makes sense, at least to me. I'm the one with the guitar, so if anyone doesn't like it, too bad. So in a sense, the guitar can be the commentator or it can rock the house. It can do a lot of things. The point is it is filtered through my aesthetic.

And your own work?
When I'm doing my own pieces I'm also commenting on things outside my music. If there's one thing that runs through all my work it's this concept of commentary and dialogue. I have no interest in creating a brand name or a branded sound of guitar playing. The ideal is that each piece creates its own language and its own sonic world. The attempt at that would be the one consistency.