Marc Hoffman Trio To Perform For "Friday Night Out" 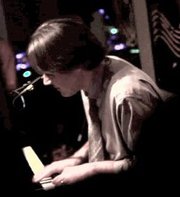 With Terry Peoples on bass and Chris Garges on drums, the trio will serve up many songs from Hoffman's new all-original jazz CD, Curioso, as well as other jazz and pop favorites.

Virillion Music released the CD this summer. Tracks can be heard on Marc Hoffman's website, www.marchoffman.com, and at CDBaby, Amazon, and iTunes.

Downtown Salisbury, Inc., sponsors Friday Night Out events each first Friday from April through October. “Many thanks to Betz McKeown and Downtown Salisbury for asking us back this year," Hoffman said.

Composer/pianist/vocalist Marc Hoffman received his degree in composition from the North Carolina School of the Arts and studied film composition at USC. He also attended The Dartington International Summer School of Music in Devon, England. His composition teachers have included John Corigliano, Leo Arnaud, Neil Hefti, and Sherwood Shafffer. A member of BMI and the American Composer's Forum, he is also founder and artistic director of the Salisbury School of Music. He lives in Salisbury with is wife, Anne, and their daughter August. For more information Marc Hoffman and his work, visit www.marchoffman.com and www.myspace.com/marchoffman. He is also available on Facebook under Marc Hoffman Music.