Manhattan Transfer to Perform Benefit Concert for the Society of Singers 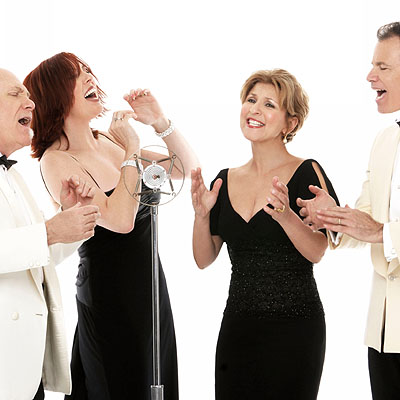 slideshow
The legendary vocal group Manhattan Transfer is performing a benefit concert for the Society of Singers, which is celebrating its 25th anniversary this year. The show will take place on the evening of September 11, at the El Portal Theatre in North Hollywood at 8:00 pm with premium tickets including a pre-concert reception.

The Manhattan Transfer, which consists of Tim Hauser, Janis Siegel, Alan Paul and Cheryl Bentyne, was founded more than 35 years ago by Hauser, who dreamed of blending jazz, R&B, pop, rock 'n' roll, salsa and swing into a vocal group without limits. The group has released more than two dozen albums, enjoyed 18 charting singles (including the Top 10 pop hit “The Boy from New York City") and won eight Grammy Awards in a variety of categories; in 1981, they became the first group to win Grammys in both pop and jazz categories in a single year. Four Quarters Entertainment will release Manhattan Transfer's new CD entitled The Chick Corea Songbook in September.

The Society of Singers was founded by Chairman Emeritus Ginny (Mrs. Henry) Mancini and Gilda Maiken Anderson when the two friends, both of them former professional singers, realized that many of their friends and colleagues were without pensions, unions, medical insurance or places to turn for financial help during tough times. With the help of donations from private and corporate sponsors, SOS works to meet the emergency needs of applicants who have earned their primary living as singers for five years or more. SOS also awards scholarships to students pursuing their education in the vocal arts.

The benefit concert will take place at the El Portal Theatre, 5269 Lankershim Boulevard in North Hollywood, on Friday, September 11, 2009.

About The Manhattan Transfer