Madeleine Peyroux to Perform Sunday, May 20 at the Sheldon 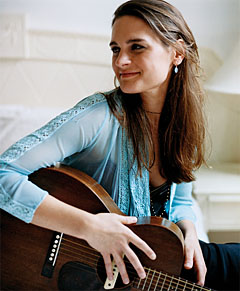 slideshow
Singer, songwriter and guitarist Madeleine Peyroux (pictured) will make her St. Louis debut in a performance at 7:30 p.m., Sunday May 20 at the Sheldon Concert Hall.

Noted for a vocal sound that's been compared frequently to Billie Holiday, Peyroux released her first record back in 1996, but didn't really gain widespread attention until her 2004 album Careless Love. She's put out three more albums since then, and over the course of her career has covered material associated with musicians ranging from Bessie Smith, Edith Piaf and Patsy Cline to Bob Dylan and Leonard Cohen. Her 2011 release Standing On The Rooftop generally was considered to be a move away from jazz and toward a rootsier, Americana-type sound.

Peyroux's concert is being presented by the Friends of the Sheldon as a benefit for the hall's educational programs, which reach more than 20,000 students each year. Patron tickets are on sale now at $125 and $75 and include preferred seating, a pre-concert wine and dessert reception, and a tax deduction; the $125 tickets also include complimentary parking. To purchase patron tickets, call The Sheldon at 314-533-9900. Single tickets will be $45 orchestra, $40 balcony and will go on sale at 10:00 a.m. Saturday, April 21 via MetroTix.