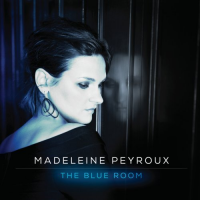 “Ray’s 'cultural landmark' album has always been a part of me," says Klein. “Madeleine naturally came to mind with this project. Much like Charles who in 1962 jelled R & B, Gospel, Country and Jazz, Madeleine is at a nexus of styles. She comes from the same places, blending Jazz, Blues, Country and Pop."

The duos' concept was in no way intended to replicate the instrumentation, arrangements, style or sequence of the original album. Instead, Madeleine and Larry represented the artistic freedom Ray exhibited, using imagination to break down musical categories and barriers.

What Madeleine and Larry created is a sophisticated album rich in strings, pushing the power of Madeleine’s vocal capabilities – her melody changes, choices of tone and phrasing. The Blue Room explores new ground, showing that like jazz itself, Madeleine is willing to take new chances – reinterpreting songs with an emotion and depth that can’t help but touch the soul.

“I didn’t want to just do a straight forward covers album,” says Madeleine. “When Larry first brought this project to me, I was so moved by what I heard that it truly inspired me to both reinterpret these songs while also merging them with others that I thought fit perfectly.”

Wisely, Madeleine felt that the infusion of newer but like-minded material was essential to this project. Gems like Randy Newman's “Guilty," Warren Zevon's “Desperadoes Under The Eaves” and John Hartford's “Gentle On My Mind," prove Madeleine to be an uncannily insightful 'interpreter' with her impeccable choice of material.

To get fans excited, Madeleine released the video for first single and Buddy Holly song “Changing All Those Changes.” Watch below.

Beginning on March 20th, Madeleine will kick off a world tour that will include two nights at Lincoln Center in New York City. Tour dates below (many more to come!)