SOURCE: ALL ABOUT JAZZ PUBLICITY
March 19, 2009
Sign in to view read count 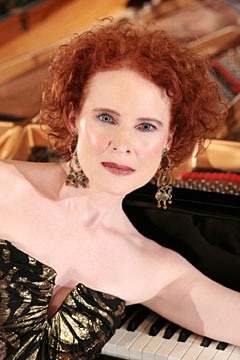 The project was recorded at the multi-Grammy and Emmy Award winning Bennett Studios, just outside New York City, and includes video documentation of “behind the scenes" footage of the CD recording, a bonus DVD program of a live, private, “in-studio" audience concert, and up-close and personal interviews with each artist. The release displays a new creative direction for Arriale, as she continues her illustrious musical journey, which began with a ten-year run of her celebrated former trio. Arriale continues to garner critical praise in every configuration in which she chooses to play as an outstanding leader, including, from The New York Times: “brilliant musicianship and bandstand instincts (which) place her among the top jazz pianists of the day."

This new release, with iconic jazz masters Brecker and Mraz, brings even more heightened originality to Arriale's sound as evidenced in her six powerful, new compositions and inspired arrangements of covers by composers as disparate as Sting, Thelonious Monk, Dizzy Gillespie and Tommy Wolf.

“This is music that really transports the listener into the wondrous world of Lynne's imagination," said Jana Herzen, President of Motema Music. “I'm proud to say it is really like no other jazz record I have ever heard. What I find most interesting is, if you check out the DVD interviews, Randy and George - these iconic jazz stars who have recorded over 1000 records between them - are so taken with Lynne's completely singular approach to composing and recording."

“It's all about the 'nuance,' and that's what we went for," said Randy Brecker, working with Arriale here, for the first time. “She knows how to tug at the heartstrings (and) I don't think I can compare her to anyone...her music transcends jazz. It's just pure music."

Arriale has been capturing the imaginations of jazz and mainstream music lovers with her outstanding CD / DVD recordings and sold out performances for nearly 20 years. Critically acclaimed as having a 'singular voice' as a pianist, leader, composer, arranger and for “putting the heart back into jazz" (London Times), Arriale's consistently excellent recordings have topped every notable jazz chart. With back to back #1 Jazz Week radio hits, a #17 debut on Billboard's Jazz Chart, the top ten “Best Of" lists for The New Yorker, United Press International and a two time winner of The German Record Critics Association, Arriale has earned her place among elite international artists. Arriale has met the mainstream though featured performances on PBS' nationally televised Profile of a Recording Artist, and in multiple NPR programs, including Weekend Edition, Jazz Set, and Piano Jazz with Marion McPartland.

Leading up to the release, Lynne will tour internationally in the United Kingdom, Italy, Germany, Switzerland, Norway, Poland, Austria, and The Netherlands. Deeply committed to jazz education, Lynne Arriale is currently Assistant Professor of Jazz Piano and Director of the Jazz Combo Program at The University of North Florida at Jacksonville. She also conducts master classes, clinics and workshops internationally for professionals, students and communities at large.

Motma Music, founded in 2003 in San Francisco, is now based in Harlem, New York, The company is a division of the Motema Foundation, a private foundation that is dedicated to promoting excellence and humanity in jazz and other creative art forms that promote harmony and enrich the world around us.