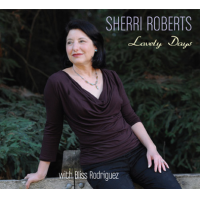 Roberts takes a different tack on Lovely Days, her fourth album as a leader and her second for Blue House Recordings/Pacific Coast Jazz. On the new CD, which will be released January 15, she chose to work in a duo setting with Bliss Rodriguez, a brilliant but little-documented pianist who, like Roberts, has been a Bay Area resident since the 1980s. The two have been gigging together on and off for the last six years.

In a departure from more typical vocal/piano duos where the focus is strictly on the singer, “I decided to approach this recording as an opportunity to let Bliss stretch out, because I wanted people to experience his inventiveness,” says Roberts, who handled CD production alone for the first time. “But I also wanted the album to reflect the kind of experiences I’ve had on our gigs together. I wanted these songs to unfold as they would as if people were hearing us live. We’re feeding off each other emotionally.”

The CD takes its title from the opening medley of Irving Berlin’s “It’s a Lovely Day Today” and “Isn’t It a Lovely Day.” Roberts and Rodriguez also put their stamp on Harold Arlen’s “Hit the Road to Dreamland,” Rodgers and Hammerstein’s “We Kiss in a Shadow,” Dave Frishberg’s “Our Love Rolls On,” and, from The Fantasticks, “Soon It’s Gonna Rain.”

Many of the songs, says Roberts, provided the soundtrack to her Southern childhood. “But even though Bliss is twelve years my senior, and from New York City, he grew up with these same soundtracks at a different phase of his life,” she says. “They are every bit as much his songs as they are mine.”

Sherri Roberts’s knack for uncovering the roiling emotional undercurrent of a lyric probably stems from her theatrical background. Born in Greenville, South Carolina and raised in Atlanta, Roberts spent her teenage years as an aspiring actor. She earned a B.A. in theater from Antioch College in Ohio, while at the same time exploring her newfound fascination with jazz.

Relocating to the Bay Area in the early 1980s, Roberts pursued her love of theater, but gradually discovered that she could find more immediate creative release in jazz, investigating characters and an entire narrative arc in the course of a song. Turning her attention to the bandstand, she started sitting in at open mic sessions, learning tunes and honing her skills as a storyteller.

She recorded two acclaimed albums for Brownstone Records, Twilight World (1996) and Dreamsville (1998), with The Sky Could Send You following in 2006. About the latter CD, Christopher Loudon wrote in JazzTimes: “Stylistically, Roberts bears a significant resemblance to gin ’n’ satin seductress Julie London. But where London’s voice was distant as a winter moon, Roberts’ is all dappled sunshine. . . shimmering delicacy. . . Enchanting.”

Bliss Rodriguez was born in New York City in 1945 to parents from the Dominican Republic. Blind since the age of 17, Rodriguez studied at Juilliard and graduated from the Mannes College of Music, then earned his Master’s in performance and composition from SUNY’s Harpur College at Binghamton. He spent much of the 1970s in Houston, performing with rising star vocalist Roseanna Vitro, and worked on the New York and Los Angeles scenes before settling in San Francisco in 1986.

“From the get-go I felt that Bliss was a real original,” says Roberts. “He hasn’t really recorded much, if at all. In the duo setting, which is how we work, he’s so abundantly creative. It’s a setting in which you’re both laid bare. As time went on I felt we should try to capture some of this relationship and Bliss’s talents. That was the impetus to go into the studio and make this recording.”