There are certain CDs that we have in our collections, that we can listen to, over and over, to uplift us. Louis Apollon has written such a CD... We need his stories of love, peace, tolerance and joy in the simplicity of living a life where we are loved by those around us. The amazing rhythms of this talented group will have you on your feet or singing out loud, in your car. —Pamela Hines, Live Jazz New England on 90.5 WICN radio 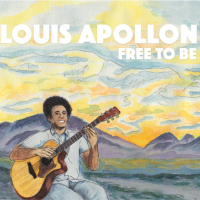 On April 15, Rockwood Music Hall will welcome a new face to their stage, Boston’s jazz-folk songwriter Louis Apollon. Originally a New York native, Apollon is looking forward to officially releasing his debut record in a place where he will always consider home. Free To Be, Apollon’s jazz/folk record, celebrates human imperfection, combining uplifting musicality with a soothing, yet energizing vibe that represents his own infectious positivity.

Following his performance at Rockwood Music Hall, Apollon will embark on a series of tours throughout New England, with featured performances at The Spire Center (Plymouth MA), One Longfellow Square (Portland ME), AS220 (Providence RI), and more.

Louis Apollon is a Boston-based jazz-folk Singer-Songwriter whose stories celebrate human imperfection, combining uplifting musicality with a soothing, yet energizing vibe that represents his own infectious positivity. His debut album Free to Be, which was released this past September, captures the essence of Apollon and his band in live performance mode. It explores many emotions and life experiences through short stories and musical conversations and is a perfect fit for listeners looking for an inspired and organic musical experience.