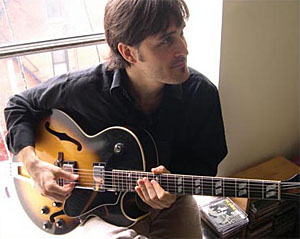 Our fourth and final installment is imminent, and it's been an incredibly exciting month of great performances by so many outstanding musicians, witnessed by so many appreciative fans. All those who came to these events are to be commended for their support and for proving that artful music can also be exciting, compelling, and, dare we say it...popular. Well, maybe not Dane Cook popular, but more like Louis C.K. popular. Okay, probably closer to Patton Oswald popular, he looks like he should play trombone or something.

Guitar players have been well represented throughout our residency, so it is only fitting that we finish our tenure at Blue Whale with one of the best. Kreisberg is still in his thirties, yet can already be considered a true veteran of the New York jazz scene, having performed with luminaries like Lee Konitz, Ari Hoenig, Joel Frahm, and Dr. Lonnie Smith, not to mention having his own successful solo career, performing worldwide with great sidemen like Larry Grenadier, Bill Stewart, Gary Versace, Aaron Goldberg, and Matt Penman. Kreisberg is a true master of the guitar and a harmonic and technical wizard, his abundant virtuosity perhaps only matched by the emotional intensity of the sound he pulls out of his Gibson. His performances are bonafide clinics for guitarists and other jazz musicians alike.

Kriesberg has five solo recordings, including the excellent Nine Stories Wide (Criss Cross 2009) with Larry Grenadier and Bill Stewart, and his latest release entitled Shadowless (New For Now 2011), which features pianist Henry Hey, saxophonist Will Vinson, drummer Mark Ferber, and bassist Joe Martin, all of whom (with the exception of Hey) will be joining Kreisberg on Wednesday. Vinson is widely considered to be one of the finest alto saxophonists in jazz today, with unbelievably beautiful command of his horn tempered by his knack for memorable melodic phrasing. The amazing Mark Ferber has already put in his time this month at the Blue Whale, as the house drummer for all three sets of Part I of our residency, and needs no further introduction. The hidden treat of this show will the the Blue Whale debut of bassist Joe Martin, who is one of the most sought after bassists in New York currently, with an incredible resume that documents his performances with Chris Potter, Kurt Rosenwinkel, Ben Monder, Gilad Hekselman, Mark Turner, Ethan Iverson, and so many others. HIs latest CD Not By Chance (Anzic 2009) features an all start cast of Brad Mehldau on piano, Chris Potter on saxophone and bass clarinet, and Marcus Gilmore on drums. Overall, the band is a literal tour de force of jazz heavyweights, not to be missed.

Opening the evening will be a group led by a fine guitarist and composer form Los Angeles. Ryan Seward hails from Claremont, CA, and studied jazz guitar first at Citrus College in nearby Glendora, then at Berklee College of Music in Boston, as student of guitar guru Mick Goodrick. Seward has a keen ear and an effortless facility on his instrument, and he composes music that is equally sophisticated and accessible. This relative newcomer to the local jazz scene has already established himself, working with many great LA based musicians including Joe Bagg, Jason Harnell, Tim Pleasant, Roger Shew, Matt Zebley, and Walter Smith III, to name a few. Joining Ryan on Wednesday will be trumpeter Josh Welchez, saxophonist Scott Jeppesen, pianist Gary Fukushima, drummer Jens Kuross, and bassist JP Maramba.

Our last show has yet to be played, but overall the residency has exceeded our expectations, with some incredible playing, great crowds to see every show, a nod from the local press, and a chance for old friends to reunite and new friendships to have begun among the larger jazz community. In other words, it's been a good hang. Let's let that hang go out with a bang this Wednesday!