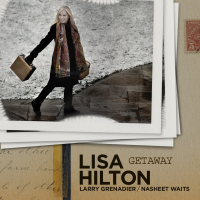 “Getaway is about finding freedom in our busy, technologically distracted lives- whether we get up and move, or renew ourselves through art, music, nature or with friends," Hilton asserts. “For me, music and art are the original social networks." This forward motion mirrors her philosophy as a composer: “We can reference our history as jazz musicians, yet still break free of the restrictions that were inherent in twentieth century music. When we listen to Jelly Roll Morton or Beethoven, we instinctively understand what era those composers date from, but a 21st century composer and musician reflects the past and the present on a global scope.”

“In our post iTunes and post YouTube lives, the entire world is now at our musical fingertips," Hilton reminds, “and that should be reflected in twenty first century music. Conceptually the title Getaway also references our need to “get away" from what we were doing musically last century. Visually we added the vintage luggage - our past - but we are definitely moving forward. In this collection, you will hear influences from jazz icons like Thelonious Monk and Count Basie, or bluesmen like Muddy Waters, along with the rock anthems of Billy Joe Armstrong and Green Day, the cool rhythms of Dirty Projectors, the big bass sounds of Deep Purple, the balladry of Chopin and Stephen Foster, masters like Prokofiev, Steve Reich, Henry Mancini, Scott Joplin, and even nursery rhymes – you get the idea- everything has potential for us as musicians."

One especially noteworthy characteristic of this new release is how Hilton frees the bass and drums from the ordinary constraints of supporting players. Waits' floating, hovering colors and Grenadier's tersely dancing countermelodies attest to the chemistry and camaraderie of top musicians in what is decidedly a group effort. As producer, Hilton has enlisted renowned engineer James Farber, along with her longtime engineering team of the multi-Grammy winning Al Schmitt and Gavin Lurssen for an audiophile recording that captures every lingering nuance across the sonic spectrum, from Hilton's murkiest low notes to the whisper of a cymbal or overtone from the bass. It's the latest and arguably most fascinating chapter in the career of one of jazz's most irrepressible, original voices.

At this point in her history as a jazz artist, Hilton consistently mixes tradition, with a defiantly individual voice, equal parts purist tunesmith and sonic adventurer. The album kicks off on a lithely suspenseful, modally-charged note with the title track, followed by the irresistibly gleeful bounce of Just for Fun. Stepping Into Paradise hints at tango and reggae all the way up to a to a rapturously lyrical intermezzo, while the artfully shapes hifting Evening Song evokes Bill Evans or Brad Mehldau at their most lyrical. The urban grit and edgy rhythmic freedom of City Streets rubs up against the booming intro and hypnotically menacing pedal point of Lost and Found. The steady insistence of Emergency evokes anthemic rock in an inspired improvisational moment, while Unforgotten swings with elegaic bluesiness. Throughout the recording, Hilton holds the center against Grenadier's polyrhythms and iconic soloing and Waits' coloristically shuffling clusters, ethereal washes and bold statements. Additional tracks include the jaunty ragtime-inspired vignette Stop and Go, while Slow Down swings with masterfully rhythmic dynamics to an almost epic intensity and then back down to suspense again. The album concludes with a solo piano piece, Huckleberry Moon, evoking a peaceful, and bucolic vibe.

Over the course of her career, the “Lioness of Jazz" has played with many of this era's jazz luminaries, notably Christian McBride, Steve Wilson, JD Allen, Jeremy Pelt, Lewis Nash and Bobby Militello of the Dave Brubeck Quartet. A pioneer as one of the first major jazz musicians to pursue a career as an independent artist, Hilton has released a total of seventeen albums, teaming up with Grenadier for five recordings and for three with Waits. Hilton has played major jazz venues coast to coast, is regularly programmed on jazz radio around the world and hosts nearly 200 tracks on iTunes. A leading advocate for contemporary composition and a jazz educator, Hilton has a special commitment to helping young, blind musicians. Her clinics and master classes include leadership engagements at the historic Perkins School for the Blind in Boston, the Chicago Lighthouse for People Who are Blind or Visually Impaired, the Junior Blind of America in Los Angeles and their Camp Bloomfield in Malibu, and the Berklee College of Music and their adaptive technology lab in Boston among other student-oriented programs.