SOURCE: ALL ABOUT JAZZ PUBLICITY
July 13, 2009
Sign in to view read count 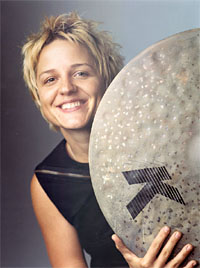 This exciting, genre bending project is made possible by a stellar team of sidemen. This week, we'll be focusing on the drums, played by Allison Miller. Allison has a most impressive resume, and her energy will undoubtedly bring a great vibe to the project.

In Lindsey's own words:

Allison Miller is one of the finest drummers around. We've played together with Susan McKeown and she was also the driving force on my CD, 'Don't Count on Glory'. She currently plays with Ani DiFranco and anyone else lucky enough to get her.
Lindsey Horner

NYC-based drummer Allison Miller defies all boundaries bringing her individual sound to diverse types of music while preserving their stylistic authenticity. Allison goes from playing with legendary songwriting vocalists Ani DiFranco and Natalie Merchant, to touring with avant-garde saxophonist Marty Ehrlich and legendary organist Doctor Lonnie Smith. She approaches each of these musical situations with her own stylistic identity and a creative, fresh and energetic approach.

Allison is also an avid composer, singer, and producer. She is currently celebrating the release of her new band's self-titled album, EMMA, and is anticipating the release of her new piano trio album, BOOM TIC BOOM, featuring Myra Melford on piano and Todd Sickafoose on bass. She continues to celebrate her critically acclaimed 2004 debut release 5AM Stroll (Foxhaven Records) and 2005 release Agrazing Maze: At the End of the Day (voted top 10 jazz records of 2005: All About Jazz NY).

Allison also produced the critically-acclaimed children's album Ask the Planet (2009). Organized by the Biomimicry Institute, Ask the Planet connects environmentalism with song, while educating children about respecting the environment and learning from nature's plan.

Allison's drumming and composing have also been featured on the Showtime hit series, The L Word. In addition, Allison has been chosen by the US State Department to tour East Africa, Eurasia and Southeast Asia as a Jazz Ambassador.