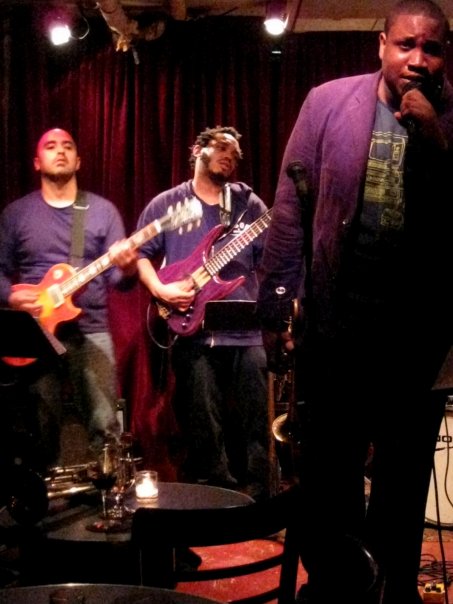 slideshow
The trumpeter, singer, bandleader and provocateur Leron Thomas, a New Yorker originally from Houston, isn't making it easy on himself. His records, self-produced and often underproduced, are hard to sum up, and that's the point.

They're perverse and searching and sketchy and sometimes quite lovely: straight-ahead jazz— he is a serious improviser, rhythmically strong and controlled in ballads&#151as well as R&B, tense indie-rock and several kinds of singer-songwriter music. He sings in croons and yelps, making acid commentary about competition between musicians, sexual rituals and everyday treachery, feckless posing, attractions and repulsions, and class and race. Sometimes you don't know when he's joking, or what kind of joke he's making. Sometimes he isn't joking. Basically he's letting the audience come to him. To that end, you can hear all his albums on iTunes now, or order the discs through his Web site, leronthomas.com; they range from the instrumental small-group jazz of “Around You," to the consolidated songcraft of “Juxtaposed," to the all-over-the-placeness of “Improvsensation" and the “Dirty Draws" series.

So on Vol. 3 of that series, we've got the leering “What You Need," with a spaced-out, glamorous atmosphere and sophisticated funk; “Owe It All," prog-jazz in 6/8 rhythm; “Stadium Lights," with needling racial commentary in soothing, then sweeping chord changes; “Blush," a Neptunes-influenced come-on to a complicated woman; “Proverbs," a foggy, mid-tempo instrumental ballad with warm, broad trumpet playing and smart rhythmic accents; and “Mr. New York," about feeling disaffection for a great city. It's a legit piece of post-cabaret on a big subject, something to file with LCD Soundsystem's “New York I Love You, but You're Bringing Me Down" and Dave Frishberg's “Do You Miss New York?"

“Dirty Draws, Vol. 3" is a choppy sprawl stacked with attitude, probably too much to handle in an album; a producer is both what it needs and exactly what it doesn't need. But in this case, what's an album? Mr. Thomas is making a case for his work as one long, curious unspooling.