We wanted to retain the original character of Monk's music. We weren't looking to reinvent the wheel on masterpieces. We wanted to keep the essence of the songs, that timeless commonality they have, while blending in our own spices and flavors.
—Leon Lee Dorsey 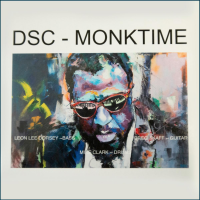 slideshow
Twenty years after the release of his last album, bassist Leon Lee Dorsey reassumes the mantle of a recording artist in his own right with the September 13 release of MonkTime (Jazz Avenue 1 Records). The debut of Dorsey’s DSC Band, which also includes guitarist Greg Skaff and celebrated drummer Mike Clark, features the trio applying their potent chemistry to eight compositions by jazz titan Thelonious Monk.

While Dorsey is himself a talented, accomplished composer and arranger, he brings a minimal, spacious treatment to bear on MonkTime—preferring to let the tunes speak for themselves. “We wanted to retain the original character of Monk’s music,” Dorsey says. “We weren’t looking to reinvent the wheel on masterpieces. We wanted to keep the essence of the songs, that timeless commonality they have, while blending in our own spices and flavors.”

Those spices and flavors are simultaneously bold and subtle: a paradox that Monk would surely have appreciated. Skaff, as the DSC Band’s principal soloist, favors lean single-note lines that tend toward the low and middle registers (as on “Blue Monk”), imbuing them with a distinctive round, dark tone. It gives extra oomph to the chords and high crescendos he does employ in places like “Little Rootie Tootie.” Clark reins in his famously brawny chops; he keeps the swing supple and assured but eschews pyrotechnics, even in his solos on “Monk’s Dream” and “Epistrophy.”

Dorsey, meantime, sets the pace. Whether it comes through his beautiful reading of the melody on “Monk’s Mood” or the gentle pulse and solo he lends to “Ugly Beauty,” the bassist’s command of both the repertoire and ensemble avoids flash, yet is nevertheless unmistakable.

Dorsey keeps it tight on MonkTime; only one of the eight tunes strays beyond to the six-minute mark, and then just barely. “We took a page out of the vinyl era in keeping the songs at a manageable length,” he says. It brings a sense of clarity and focus to the performances, spotlighting the trio’s interplay as much as the individual improvisations.

Leon Lee Dorsey was born March 12, 1958 in Pittsburgh, Pennsylvania, to a family that was plugged in to the Steel City’s storied jazz lineage. He began playing piano in third grade and, the following year, switched to classical cello studies with members of the Pittsburgh Symphony at the famed Center for the Musically Talented, where he remained throughout high school. He also picked up electric bass in the seventh grade and, later, in high school, was drawn to the double bass, having always loved the instrument.

Dorsey attended Oberlin College Conservatory, graduating with double degrees in music in 1981. Under the tutelage of bass legend Richard Davis, he received his first master’s at the University of Wisconsin at Madison and a second master’s from the Manhattan School of Music in New York. Dorsey then pursued doctoral studies at the City University of New York under Ron Carter, finishing his doctorate at Stony Brook University.

In 1986, Dorsey began a two-year stint with the Lionel Hampton Orchestra, including performances with Frank Sinatra and visits to the White House, which honed his skills for his next endeavor, namely as a Jazz Messenger. In 1988 he joined Art Blakey’s most fabled of jazz finishing schools, which left a lasting impact on his subsequent career.

Since arriving in New York, Dorsey has performed and recorded with jazz legends Dizzy Gillespie, Lionel Hampton, Hilton Ruiz, Cassandra Wilson, James Carter, Freddie Hubbard, and the Duke Ellington Orchestra. He released his acclaimed debut album, The Watcher, in 1995 and followed it up with 1999’s Song of Songs. In 2003 he founded Leon Lee Dorsey Studios in New York City, at which more than 100 albums have since been produced.

Dorsey is also prominent as a jazz educator. From 2008 to 2011 he was Coordinator of Jazz Studies and Director of the Jazz Seminar at the University of Pittsburgh. Currently, he teaches harmony and jazz arranging and composition at Berklee College of Music in Boston. He looks forward to working with the DSC Band and hopes to be announcing performance dates soon. “I felt from the start that with the chemistry of this band—there’s no horn and no piano, the two instruments that defined Monk’s sound—we could go to the magical music level.”