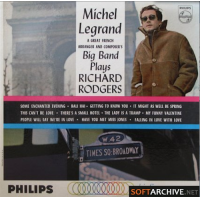 slideshow
In the 1950s, everyone in jazz and pop was sweet on Richard Rodgers. Many of the composer's highly melodic songs were easy to sing and leverage for swinging interpretations. Whether they were written with Lorenz Hart or Oscar Hammerstein II, Rodgers' love songs sounded hip without trying, becoming perfect vessels into which musicians could add their own ingredients.

While there were many small-group and vocal albums of Rodgers' music in the 1950s and '60s, only three big bands recorded instrumental interpretations of his work. Interestingly, all three are drop-dead great. While you surely know Shorty Rogers Plays Richard Rodgers, recorded in January 1957, and you may know Les Brown's Richard Rodgers Bandbook, recorded in April 1962 (go here for my post on the Brown album), you probably are unaware of the Michel Legrand Big Band Plays Richard Rodgers. It's completely out of the park.

Recorded over three days for the Philips label in New York in early December 1962. The size and caliber of the personnel on the sessions were staggering.

On My Funny Valentine, Some Enchanted Evening, Getting to Know You and People Will Say We're in Love...

On It Might as Well Be Spring, There's a Small Hotel, Bali Hai and Falling in Love With Love...

And on Have You Met Miss Jones?, This Can't Be Love and The Lady Is a Tramp...

The arrangements are both Gil Evans-delicate in their orchestral tenderness and powerfully swinging in their band attack, akin to the pen of Johnny Richards in places. I have to say that Legrand's approach to Rodgers is easily the more engrossing and addictive of the three band recordings. Charts breathe sensually with dense woodwind complexity and have a wide-body brass feel. There are plenty of curves, and no two arrangements sound alike. [Photo above of Richard Rodgers]

Legrand was at his jazz peak here in between scoring for two films—the black-and-white Lola (1961) and the richly colorful Umbrellas of Cherbourg (1964), which would put him on the map. His orchestral thinking was astonishing. It's really a shame a label didn't pony up the cash needed to have him take on the songbooks of 10 additional American composers.

JazzWax tracks: Unfortunately, the Michel Legrand Big Band Plays Richard Rodgers isn't available as a download at Amazon. There are used versions of the CD here.

JazzWax clips: Here's The Lady Is a Tramp, with a tenor sax solo on early ballad section by Paul Gonsalves and a piano solo by Tommy Flanagan on the up-tempo second half. Talk about groovy...