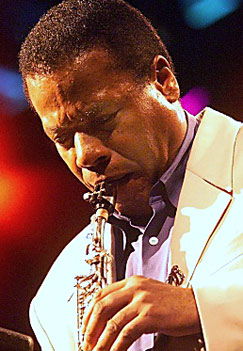 “Wayne Shorter is jazz's all-around genius, matchless in his field as a composer, utterly original as an improviser...one of the freshest saxophonists in jazz, as well as possibly its best small-group composer ever."--New York Times

“A smart and assertive trumpeter...Mr. Stafford does a superlative job with a broad range of themes."--New York Times

Legendary saxophonist-composer Wayne Shorter returns to the Kimmel Center to explore the metaphysical heights of jazz with his Quartet and shares the stage with Terell Stafford Quartet in Verizon Hall on Friday, March 28, 2008 at 8pm. Wayne Shorter's 50 year career reshaped the stylistic playing of jazz standards in the '50s and '60s with his improvisational skills, first displayed in collaborations with jazz greats John Coltrane, Sonny Rollins and Miles Davis. The Wayne Shorter Quartet features Kimmel Center Mellon Jazz Up Close Series Artistic Advisor and Panamanian pianist Danilo Perez, bassist John Patitucci and drummer Brian Blade, who continue to explore the boundaries of jazz with a deconstructivist approach to live performances.

Hailed as “one of the great players of our time" by piano legend McCoy Tyner, Philadelphia-based trumpeter Terell Stafford and his Quartet will open the show with a jazz performance imbued with hard bop, bossa nova, mambo and blues. On stage, Stafford's distinctive voice emanates in originals as well as reinterpreted classics, as heard on his first live album, Taking Chances: Live at the Dakota.

This concert is the fourth concert in the Mellon Jazz Fridays Series scheduled for the Kimmel Center Presents 2007/2008 season. The next concert in the series will be the Dave Brubeck Quartet with Freddy Cole on Wednesday, April 16, 2008 at 8pm.

“We play a similar outline in different cities," comments Wayne Shorter on the group's risk taking chemistry and deconstructivist aesthetic toward live performances. “We're getting further and further away from anything sounding the same from night to night. These guys all have that kind of forward-looking attitude. They understand that it's okay to be vulnerable, to open oneself and take chances, and not be afraid of the unknown."

Newark, New Jersey native Wayne Shorter began his lifelong musical journey playing tenor saxophone in the teenage band The Jazz Informers, and was soon playing with jazz legends and fellow saxophonists John Coltrane and Sonny Rollins. Shorter joined the Miles Davis band in 1964, and in 1970, co-founded the premier fusion group of the '70s and early '80s, Weather Report. After recording a succession of electric jazz albums, Shorter re-emerged with 1995's High Life followed by 1+1 in 1997, an intimate recording with pianist and former Miles Davis quintet bandmate Herbie Hancock. In 2001, Wayne began touring as the leader of his all-acoustic Wayne Shorter Quartet. The group's uncanny chemistry was well documented on 2002's acclaimed Footprints Live!, followed by Grammy® winners Alegria (2003) and Beyond the Sound Barrier (2005). The quartet was named Best Small Ensemble of 2002 by the Jazz Journalists Association.

After studying at the National Conservatory in Panama and graduating from Berklee College of Music, pianist Danilo Perez quickly won over the world's attention. He has led his own group since the early 1990s, and as bandleader has earned three Grammy® nominations for his ebullient and innovative recordings. Perez has toured with Steve Lacy, Jack DeJohnette, Charlie Haden, the late Michael Brecker, Tito Puente, Wynton Marsalis and Roy Haynes, among others. He is currently founder and president of the Panama Jazz Festival. He also serves as faculty of the New England Conservatory and Berklee College of Music, an Ambassador of Goodwill for Unicef and a Cultural Ambassador of Panama. Since 2003, he has served as artistic advisor for the Kimmel Center's Jazz Up Close Series in Perelman Theater, curating five nights of jazz each season. Each performance has been recorded for broadcast by WRTI.

Since attracting worldwide acclaim as a member of Chick Corea's Elektric Band and Akoustic Band, Grammy®-winning bassist John Patitucci has become one of today's most influential musicians and composers. He has released several remarkable albums asleader of his own groups and made notable contributions to renowned ensembles led by Wayne Shorter, Stan Getz, Freddie Hubbard and Danilo Perez. As a performer, Patitucci has played throughout the world with his own band, and with jazz luminaries Herbie Hancock, Stan Getz, Wynton Marsalis, Joshua Redman, the late Michael Brecker, Randy Brecker and scores of others. His work has garnered a total of two Grammy® Awards and more than fifteen Grammy® nominations

Brian Blade's unique drumming styles have been at the forefront of pioneering a new wave of New Orleans-based Dixie music. The Louisiana native began playing drums in his father's church after an initial interest in the violin. He studied under New Orleans Dixie-drum masters Johnny Vidacovich and Herlin Riley, as well as Ellis Marsalis. Blade has recorded with Bob Dylan, Emmylou Harris, Daniel Lanois and Joni Mitchell. He toured with Joshua Redman and Kenny Garrett before forming his own jazz ensemble, the Brian Blade Fellowship. The Brian Blade Fellowship most recently released Friendly Travelers (2007), featuring Austrian guitarist Wolfgang Muthspiel.

Trumpeter, composer, arranger and bandleader Terell Stafford began his jazz studies under the guidance of Dr. William Fielder at Rutgers University. During his time at Rutgers, Stafford was invited to join Bobby Watson's acoustic quintet, Horizon. Stafford has performed with groups such as Benny Golson's Sextet, McCoy Tyner's Sextet, the Kenny Barron Sextet, the Frank Wess Quintet, the Jimmy Heath Big Band and the Jon Faddis Orchestra. He has also been an integral part of bands led by such venerable artists as Cedar Walton, Sadao Watanabe, the Clayton Brothers, Herbie Mann and Matt Wilson. In addition to being featured on more than 40 albums as a sideman, Stafford has recorded several albums as a leader, including 1995's Time to Let Go; the critically acclaimed Centripedal Force (1997); Fields of Gold (2000); New Beginnings (2003); and, most recently, Taking Chances: Live at the Dakota (2007).

An educator as well as a performer, Stafford currently holds the position of Professor of Music and Director of Jazz Studies at Temple University and is a clinician for the prestigious Vail Foundation in Colorado and Jazz at Lincoln Center's Essentially Ellington Program. He has also served as a member of the faculty for the Juilliard Institute for Jazz Studies in New York.

The Kimmel Center also receives support from the Commonwealth of Pennsylvania, Pennsylvania Council on the Arts, The William Penn Foundation, The Wachovia Foundation, Verizon Foundation, PNC Foundation, The Philadelphia Chapter of the American Guild of Organists, and the Philadelphia Music Project and Dance Advance, Initiatives of The Pew Charitable Trust administered by The University of the Arts. In-kind support is generously provided by Deloitte. NBC-10 is a Media Partner for Kimmel Center Presents, and additional media sponsors include WDAS, WRTI, WJJZ, Afro-Pop, WXPN and WXPN's Kids Corner 20th Anniversary.

Free in the Plaza programming and subsidized tickets offered to the community and social service groups for $10 are made possible through the Wachovia Gateway to the Arts Community Access Program, supported by a generous grant from Wachovia Foundation.

FREE AT THE KIMMEL: