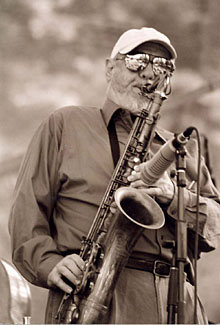 slideshow
New York, NY – Legendary multi-instrumentalist Ira Sullivan will make a rare appearance next month (April 22-23) at New York’s Zinc Bar (82 West 3rd Street) to celebrate the life of the late jazz trumpet great Red Rodney. Sullivan, who turns 84 in May, was a longtime colleague of Red's since the early 50s and co-led the Red Rodney/Ira Sullivan Quintet during the 80s recording a handful of critically acclaimed records while touring extensively throughout the US and abroad.

Beside Sullivan, the tribute will feature some of New York's finest musicians including trumpeter John Bailey, pianist David Kikoski, bassist Ed Howard and drummer Anthony Pinciotti. Showtimes on Wednesday, April 22 are at 8 pm & 10 pm and on Thursday, April 23 at 9 pm and 11 pm. For reservations, please call (212) 477-9462 or visit Zinc Bar.

A brilliant jazz improviser who performed with the swing bands of Jimmy Dorsey, Gene Krupa, Woody Herman, and Benny Goodman before joining (1949-51) Charlie Parker’s bebop quintet, Red Rodney, distinguished by his flaming red hair, was also the first white bebop trumpeter. His innovative playing style was marked by his brilliant technique and purity of tone.

Unfortunately, like many jazz musicians of his generation, his career was cut short due to drugs. Broke and desperate, he later ran afoul of the law by impersonating an Army General and stealing $10,000 from the Atomic Energy Commission along with some secret documents. This landed him in jail where he spent 3 years.

But after a long absence from the stage, Rodney made a triumphant comeback in the early 70s returning to his former glory as a skilled balladeer and later reconnecting with his former band mate Ira Sullivan. Their collaboration led to a fruitful and much-heralded association during the 80s releasing five albums and garnering a 1982 Grammy nomination for the album Sprint.

Red Rodney died of lung cancer on May 27, 1994, at his home in Boynton Beach, Florida. He was one of the last living links to Charlie Parker and bebop, and his death marked the end of an era.