SOURCE: ALL ABOUT JAZZ PUBLICITY
February 7, 2008
Sign in to view read count 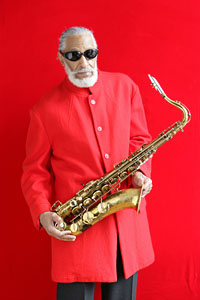 slideshow
Los Angeles (CA) Legendary jazz greats Sonny Rollins and McCoy Tyner were honored at the GRAMMY Salute To Jazz. in Los Angeles. The event featured a cocktail reception, live performances and appearances by the honorees and the Gibson/Baldwin GRAMMY Jazz Ensembles. Introductions were made by Neil Tesser and Master of Ceremonies Bill Cosby. Cosby, also a Philadelphia native shared his deep belief and felt influences from jazz with the audience in his usual great comedic styling.. Also in the audience were fellow “I Spy" actor, Robert Culp, actress and jazz crooner, Cynthia Basinet, President/CEO Neil Portnow, Chair Jimmy Jam. Rollins is a two-time GRAMMY-winning tenor saxophonist and 2004 GRAMMY Lifetime Achievement Award recipient. He emerged at the height of the bebop jazz movement, and his illustrious career has consisted of more than five decades of recording. Since 2005 he has recorded on his own record label, Doxy Records.

Rollins who was unable to attend the event due to a minor car accident, had his nephew and trumpet player, Clifton Anderson accept on his behalf.

Five-time GRAMMY-winning Tyner is a jazz pianist whose style has become one of the most identifiable sounds in improvised music. He has released nearly 80 albums and in 2007 formed his own record label, McCoy Tyner Music, in partnership with the Blue Note Jazz Club and Half Note Records.

Thirty talented high school students, representing 26 cities in 14 states, had been selected for a position in the Gibson/Baldwin GRAMMY Jazz Ensembles. The young musicians traveled to Los Angeles for a weeklong musical adventure under the direction of Justin DiCioccio of the Manhattan School of Music and Dr. Ron McCurdy of the University of Southern California Thornton School of Music.

Established in 1957, The Recording Academy is an organization of musicians, producers, engineers and recording professionals that is dedicated to improving the cultural condition and quality of life for music and its makers. Internationally known for the GRAMMY Awards -- the preeminent peer-recognized award for musical excellence and the most credible brand in music -- The Recording Academy is responsible for groundbreaking professional development, cultural enrichment, advocacy, education and human services programs. In its 50th year, The Academy continues to focus on its mission of recognizing musical excellence, advocating for the well-being of music makers and ensuring music remains an indelible part of our culture.