SOURCE: MICHAEL RICCI
September 25, 2009
Sign in to view read count
This weekend, benefit shows at the Legendary Golden Bear will celebrate the long-defunct Huntington Beach music club, which once hosted Bob Dylan and the Byrds, among others. 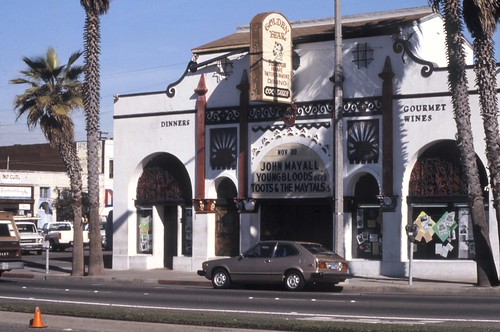 For three decades, the club was Orange County's answer to such L.A.-area folk and rock institutions as the Troubadour, the Ash Grove and McCabe's, hosting scores of local and touring performers not the least of which were Janis Joplin, the Byrds, Bob Dylan, the Grateful Dead, Neil Young, the Doors, B.B. King, Steve Martin and Jackson Browne.

The Bear, which closed in the mid-1980s amid a string of financial setbacks, opened in the 1920s as a roadside restaurant catering to travelers -- many of them Hollywood's elite.

The club it became in the 1960s was revered by musicians as one of the best-sounding rooms in the country, but it was demolished in 1986 as part of Huntington Beach's master plan to gentrify its downtown.

This weekend, however, a new generation of city officials is resurrecting the Golden Bears memory with four shows in two nights as part of the beachside community's year-long centennial celebration.

Tonight's bill brings together Doors keyboardist Ray Manzarek, multi-instrumentalist David Lindley (a key member of Browne's musical circle when his career took off), songwriter Jack Tempchin (an early associate of the Eagles) and Honk, the Laguna Beach-based rock-folk-jazz-surf group that was a regular at the club.

Saturday's lineup is topped by the Nitty Gritty Dirt Band. Members of the long-running country-folk-rock group met there while watching bluegrass and folk greats who frequented the club, inspiring them to start a band.

Also playing Saturday are Chris Hillman, one of the founding members of the Byrds and the Flying Burrito Brothers, and , his former band mate in the Desert Rose Band. That bill is rounded out by singer-songwriter Steve Noonan, an O.C. contemporary of Browne and Tim Buckley.

Proceeds from the four shows -- two each night -- benefit Sweet Relief, the Huntington Beach-based group that provides various forms of aid to musicians in need.