SOURCE: ALL ABOUT JAZZ PUBLICITY
September 29, 2008
Sign in to view read count 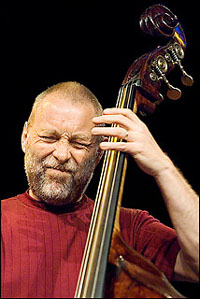 slideshow
It's been a long time since Dave Holland's small hands strummed a ukulele at about the age of five, an endeavor that eventually led him to the guitar and entry in a fledgling band as a teenager around his Wolverhampton, England, home. They played rock and R&amp;amp;B that were popular around 1960. They also decided the needed a bass player, and Holland stepped up, playing what he calls a broomstick bass--"a stick and a piece of string and a box."

Nowadays, when someone needs a bass player, Holland, now 62 and one of most iconic bassists on the planet, is probably among the first names that pops to mind. It's how he ended up playing with the likes of Herbie Hancock and Wayne Shorter in recent years. That's how it's been since the days he came from his native England at the age of 22 to play with Miles Davis. He's still in demand, but not so much as a sideman anymore--though he keeps his hand in that bag with an illustrious group of collaborators.

But landing Holland, one of the great musicians on the planet, as a sideman isn't a high possibility anymore. He's become one of the great bandleaders, not super common for bassists. His custom is to document projects along the way, and he's done it again, with the September, 2008 release of new music from a sextet formed about a year-and-a-half ago, a superb group comprised of long-time comrade Robin Eubanks on trombone, Antonio Hart on saxophone, Alex Sipiagin on trumpet, Mulgrew Miller on piano and Harland on drums. Pass It On is a significant musical statement, beautifully executed and satisfying on all levels.

AAJ Contributor R.J. DeLuke's in-depth interview with Holland, Dave Holland: Consistently Exceptional, is but one part of today's extensive coverage of Holland and Pass It On.

Contributor Mark Corrotto has already weighed in on Pass It On. Read what he thinks about the disc here, and check out Managing Editor John Kelman's new review here.

You can also listen to the title track from Pass It On as AAJ's Daily Download, and watch a video of Holland with his 1980s quintet today's Daily Video.

AAJ is committed to providing the most extensive coverage available surrounding new releases, so be sure to check out all of our coverage of Dave Holland and Pass It On today!