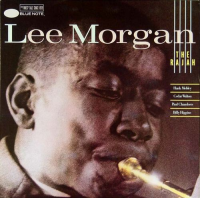 slideshow
On Nov. 19, 1966, Lee Morgan headed out to Englewood Cliffs, N.J., and Rudy Van Gelder's recording studio with tenor saxophonist Hank Mobley, pianist Cedar Walton, bassist Paul Chambers and drummer Billy Higgins. When they arrived, the quintet recorded what I consider to be a perfect album. The songs were beautifully selected, the material was well rehearsed and the playing was pure bliss by all five musicians. And then Blue Note decided to shelve the album.

Why the album wasn't released in '66 remains a mystery. The good news for us is that producer Michael Cuscuna discovered the tape reels in the Blue Note vaults in 1984 and issued the album the following year. Possible reasons for why Blue Note would put the brakes on such a wonderful album include too many Blue Note albums coming out at the same time, a desire to release a different Morgan album, a conflict with one of the other artists releasing an album, the group's inability to tour to promote the album, a failure to get rights clearance on one of the standards or a sonic flaw in a track that needed a re-take that the group didn't have time to correct at a later date. There are probably another 10 reasons not mentioned here.

What we do know is that The Rajah was released 12 years after Morgan was gunned down in 1972 by his common-law wife Helen at Slug's Saloon on East 3rd St. in New York. A blizzard prevented the ambulance from arriving quickly, and Morgan bled to death. He was 33.

The Rajah features a relaxed, sophisticated sound with a laid-back, pulse-paced feel. Many of the songs have a light Latin rhythm that was in sync with the bossa nova craze then. The song lineup was Calvin Massey's A Pilgrim's Funny Farm, Morgan's The Rajah, Duke Pearson's Is That So?, Walter Davis's Davisamba and two standards—What Now My Love and Once In a Lifetime. Mobley is particularly sensual here, sailing through these calm waters like an early-morning tug while Morgan's horn is lyrical, bright and embracing. Walton on piano is exceptional, particularly with Chambers thick bass and Higgins gentle hard-bop rhythms. I never tire of hearing this one. Hopefully Michael Cuscuna will email me with the reason why the album was held up in the first place.

For those curious about Morgan's murder, a new documentary is wending its way through the film festivals. Information on The Lady Who Shot Lee Morgan can be found here.