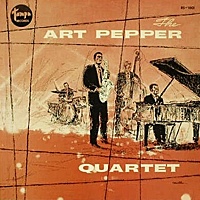 slideshow
Art Pepper recorded two albums on the Tampa label—The Marty Paich Quartet Featuring Art Pepper in August 1956 and The Art Pepper Quartet in November of that year. Tampa was founded in Los Angeles in 1955 by Robert Scherman, who previously had been president of Atlas Records (1944-1948), head of Webster Records (1949-1950), head of A&R at King Records before starting the Skylark R&B label in 1951. Tampa was sold off in 1960.

Yesterday I received an email from Laurie Pepper, Art's wife, promoting a free download of Diane from the album, which features Art Pepper (as), Russ Freeman (p), Ben Tucker (b) and Gary Frommer (d). I thought that was odd, since Laurie's free offerings have been from later live Pepper recordings and this one was from the 1950s. Curious, I went off to her site and found the answer.

“Not long after Art's death in 1982, when I was broke, I began writing to various record labels asking for royalties which hadn't been paid. This album, recorded in 1956, had never paid any royalties at all. Ever. Yet it was selling everywhere. I wrote letters, called around, threatened, pleaded, and so on—with no luck. Then, in the process of researching the murky history of West Coast jazz and blues labels, I found that the most recent owner of the Tampa label had filed for bankruptcy.

“I contacted the court and asked to purchase this album. Through them, I found out where the Tampa masters were stored, went to the warehouse, asking producer Ed Michel to come along.We picked up rusty, dusty ancient tapes, masters and mothers. The owner wanted to sell me the whole catalog, including the Charlie Parker Records catalog. But. like I said, I didn't have much money, so I bought only this master.

“The next day, somebody came along and bought all the rest of the Tampa stuff. The guy called me and said one title was missing (the album master I had just purchased) and wanted to know if he could he it from me. 'No,' I said. 'I now own Tampa 20.' Over the years, I've licensed it to Fantasy/Concord and other labels. It's one of my very favorites of Art's albums. And not because I own it. Because it's beautiful.

“This month, I'm giving away the prettiest thing—Diane. It's a song Art wrote for his second wife. I've embedded a video on this page that includes this tune. The video is part of a longer video based on Straight Life: The Story of Art Pepper, which includes Art's voice narrating and Art's music. In this four-minute sample, Art is living with Diane but still in love with his ex-wife, Patti. Diane attempts suicide."

To download Diane from The Art Pepper Quartet for free (or a donation) and to view the clip, go here.