Laurie Antonioli Sings The Music Of Joni Mitchell On Her New Origin CD, Due August 19 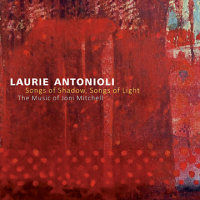 slideshow
Vocalist Laurie Antonioli delivers the most personal and soul-baring statement of her esteemed career with the release, on August 19, of Songs of Shadow, Songs of Light: The Music of Joni Mitchell. The CD, her first for the Origin label, finds the acclaimed Bay Area jazz singer returning with obvious passion and inspiration to her earliest musical influence.

“Joni’s music is such a part of me, it’s like a second skin,” says Antonioli. “So is jazz, of course, but this goes even deeper. It’s where I started. It’s both a personal and a generational thing.”

Repertoire is largely drawn from early-period Mitchell, including “Marcie” from Mitchell’s 1968 debut album Song to a Seagull and the obscure “Eastern Rain,” recorded by Fairport Convention in 1969 but never by the composer herself. Antonioli puts her stamp on some of Joni’s less frequently covered songs, such as “Woman of Heart and Mind,” “Hissing of Summer Lawns,” “Cold Blue Steel and Sweet Fire,” and “People’s Parties,” on which Theo Bleckmann contributes the background-vocal choir effects.

Also included is “Both Sides Now,” Joni’s most recorded song. For that reason, Antonioli wasn’t sure about tackling it, but “each day, at the end of the session, [pianist] Matt [Clark] and I did one or two takes to see if we could get something. We didn’t rehearse or even talk about it, other than to agree we wanted to find a different approach to it. The song evolved into a haunting jazz ballad.”

Clark and the other members of Laurie’s band of eight years’ standing—guitarist Dave MacNab, bassist John Shifflett, drummer Jason Lewis, and reed player Sheldon Brown—are her full collaborators on this project, handling arrangements as well as helping to shape the material in performances in the year before it was finally recorded in December 2013.

In fact, Antonioli recalls the moment, three years ago, when she decided that she had to do this project. Clark started playing “Boho Dance” and “I started singing along. I asked: do you know this tune, do you know that one? And he knew them all, by heart, just about every song she ever wrote.”

Songs of Shadow, Songs of Light was recorded “live” at Fantasy Studios in Berkeley, with “each of us isolated so we could all play at the same time. Thus the improvisational sections and endings and all the interaction were happening as it would in a concert. This is generally not how people make records anymore,” adds Antonioli. “Most singers get their ‘tracks’ and redo or practice their parts and then record.”

Early on in her career, Bay Area Laurie Antonioli was a protégée of Joe Henderson, Mark Murphy, and Pony Poindexter, who recruited the 22-year-old singer for an extensive European tour that turned into an eight-month sojourn in 1980.

Following the release of her 1985 recording debut Soul Eyes, a duo album with George Cables, Antonioli was one of the region’s most visible singers, booked at leading venues and festivals with her own band, performing regularly with Bobby McFerrin, and sitting in with luminaries like Tete Montoliu, Jon Hendricks, and Cedar Walton at Keystone Korner. Raising her daughter, combined with Antonioli’s work as an educator, subsequently kept her off the U.S. scene for too many years.

In the summer of 2006, she returned to the Bay Area from a four-year tenure running the Vocal Department at The Jazz Institute in Graz, Austria to take a position as the Chair of the Vocal Program at the Jazzschool in Berkeley. The Jazzschool is now an accredited institution known as the California Jazz Conservatory, Antonioli’s unique eight-semester vocal program holding up under the rigors of the reviewing committees.

Laurie’s second album, 2004’s Foreign Affair, is a bracing blend of post-bop jazz and Balkan music created with players from Serbia, Albania, Germany, and the U.S. In 2005, her long-running partnership with Richie Beirach culminated in the release of The Duo Session on Nabel Records, a critically acclaimed album featuring Miles Davis jazz standards and Antonioli’s lyrics set to the pianist’s compositions.

Her fourth album, American Dreams (2010), was inspired by feelings that arose during her years abroad and features a number of her collaborations with Austrian pianist Fritz Pauer. “It is not hyperbole to say,” wrote C. Michael Bailey in his All About Jazz review of the CD, “that Laurie Antonioli is emerging as the most important vocalist, let alone jazz vocalist, this decade. Let us hope for much more music from this brilliant constellation in the west.”

Laurie Antonioli and her American Dreams band will perform a CD release show for Songs of Shadow, Songs of Light at Yoshi’s San Francisco, Sunday 9/28.