Laura Ainsworth's Secret Is Out: "Keep It To Yourself" Hits The Charts 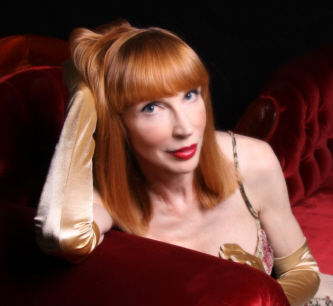 slideshow
Dallas-based singer Laura Ainsworth titled her debut CD “Keep It To Yourself," but word seems to be spreading out of her control.

The indie release, with virtually no advertising or PR budget, is garnering rave reviews and airplay across America, as well as in Brazil, Australia, France, Italy, South Africa and other nations. And Ms Ainsworth was happily stunned to learn that it has just entered Jazz Weekly's Top 200 Radio Airplay Chart, tied with such venerable artists as Herbie Hancock and Lee Ritenour.

It's not surprising that radio is so enamored of her, since her voice is a familiar one within the radio industry. As co-creator of the Comedy Wire prep service, for years, she has provided morning shows with hilarious parody songs inspired by the headlines, with titles such as “Santa Baby, Help Me Through Recession Tonight." But when her comedy-writing work is done, she turns to more serious musical pursuits. Donning elbow-length gloves and gowns that Julie London would envy, the willowy redhead takes the spotlight in live shows of her own creation. As the daughter of legendary big band sax/clarinetist Billy Ainsworth, she grew up watching her late father back such idols as Ella Fitzgerald and Tony Bennett. Her greatest love is recreating the retro style of the elegant supper club shows of the '40s and '50s, while putting a fresh twist on the Great American Songbook with her flirtatiously modern wit and her rich, perfectly-controlled, nearly-three-octave voice. It's a bewitching combination that has drawn some of the best musicians in the Southwest to her side, including longtime partner, Brian Piper.

Piper is widely regarded as one of the top pianists in Texas, with a resume that ranges from Cab Calloway to Jerry Jeff Walker. Recently honored as 2011 Dallas Jazz Musician of the Year, he also acted as producer/arranger/keyboardist for Ms. Ainsworth's debut CD. But he admits that when she brought him the songs she'd chosen, “even I wasn't familiar with some of them. But I loved every one, and Laura captures them perfectly." He called in his ace jazz trio (bassist John Adams and drummer Mike Drake) and a guest list that included violinist Milo Deering of the hot jazz/bluegrass fusion group Beatlegras, who adds some Stephane Grappelli-like swing to “La Vie En Rose;" and Chris Derose, a favorite guitar accompanist to Michael Feinstein and Willie Nelson, who duets with Ms Ainsworth on a starkly gorgeous rendition of “Skylark" cut live in a single take.

Ms Ainsworth is especially happy with the sax and clarinet solos that Chris McGuire added to such tunes as “Dream a Little Dream of Me" and “While The Music Plays On." She says, “I think even my dad would have approved, and believe me, that's the highest compliment a musician could be paid, as anyone who worked with him could tell you."

The title track is getting the most attention, with its catchy melody, contemporary smooth jazz sound and darkly hilarious lyrics about the singer's murderous plans for her cheating ex. But Ms Ainsworth is just as thrilled that the CD's success is spotlighting some of the more obscure songs she loves. They include a rollicking version of Helen Kane's 1928 hit, “He's So Unusual" that gives that old song a new meaning in light of today's more open sexual mores, and “That's the Kind of Guy I Dream Of (You Should See The Kind That I Get)," last heard as a Betty Hutton B-Side in 1952.

Ms Ainsworth said, “I love Betty, but she treated that song as a screaming novelty tune, and I always thought it was a great swing number waiting to be discovered. After we recorded it, I found out that the Nat King Cole Trio had once recorded a version of it that was never released, and I moved Heaven and Earth to find a copy. It was surprisingly similar to our take on it. Nothing makes me happier than knowing I'm on the same wavelength as Nat King Cole."

And now, thanks to all the radio support for “Keep It To Yourself," Ms Ainsworth is sharing a lot of wavelengths with Nat King Cole.