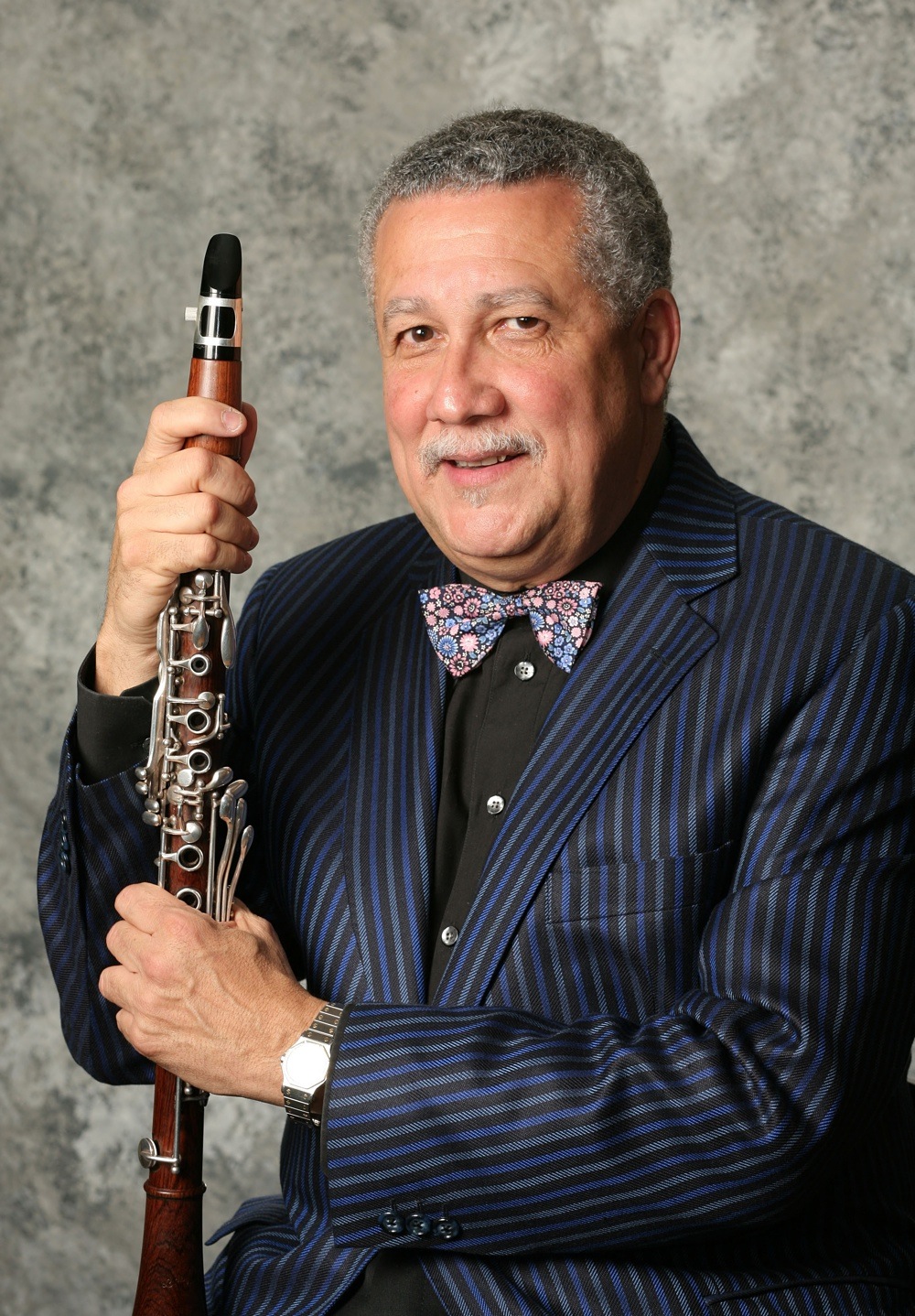 slideshow
Depth and diversity really define the magnitude of an artist's career, and determines the impact that their musical will have over time. Most artists pick a direction that dictates their musical output, but only a select few dig far into the history and potential of their chosen path. If they do, they rarely change course and continue their fully encompassing exploration. The ability to go in-depth in several different directions only exists in a rare breed of artist, and that artist will give us a wealth of important music.

Alto saxophonist and clarinetist Paquito D'Rivera has covered all these bases during the course of his highly charged musical life. Instructed in the intricacies of the saxophone and clarinet by his father Tito, D'Rivera graced the stage with the Havana Philharmonic while still a pre-teen. Jazz became his passion, and despite the wavering support of Fidel Castro government, he eventually became one of the island's leaders in the style through his work with the Orquesta Cubana De Musica Moderna. D'Rivera joined with fellow band mate pianist Chucho Valdés to form Irakere, and their explosive combination of jazz, Afro-Cuban music, rock, and funk took the Cuban musicians onto a world stage. The confines of the Cuban government took their tool upon D'Rivera though, and during Irakere's 1981 tour of Spain, he claimed political asylum and headed to the States. When he arrived in the States, D'Rivera found a welcoming community of jazz musicians that appreciated his presence, leading to work with a wide array of artists including David Amram, Dizzy Gillespie, and McCoy Tyner. D'Rivera formed his own group that brought together several of New York's top Latin Jazz artists, and a series of successful albums, along with a high profile position in Dizzy Gillespie's United Nation Orchestra, made him a widely respected jazz musician in the States. With some artistic credibility behind him, D'Rivera made some major efforts to pay tribute to the legends of Cuban music. He featured bassist Israel “Cachao" Lopéz prominently on his album 40 Years of Cuban Jam Sessionand produced pianist Bebo Valdés' long overdue return to the studio on Bebo Rides Again; as a result, both musicians experienced worldwide success in the later part of their careers. He also found a group of young musicians—trumpet player Diego Urcola, bassist Oscar Stagnaro, drummer Mark Walker, percussionist Pernell Saturnino, and a rotating cast of pianists—to form a new quintet that has fueled his work to the present. Still looking ahead, D'Rivera continued to dig deeply into new directions, starting with Tango Jazz: Live at Jazz at Lincoln Center, a collaboration with bassist Pablo Aslan. The recording features D'Rivera along with an all-star cast of Argentinean musicians that blend jazz and tango traditions in new and exciting ways. At the same time, D'Rivera expanded his core quintet to include instrumentalists from across the Caribbean and South America, recording the Panamericana Suite. This live recording showed the vast unexplored potential remaining in Latin Jazz, and D'Rivera's uncanny ability to ably traverse these realms. Moving into the future, D'Rivera continues to display an unbelievable thirst for new artistic experiences that drives him far into new musical horizons.

After a lifetime filled with cutting-edge musical experiences, D'Rivera could simply recreate his former successes, and most likely continue a comfortable career. His thirst for new artistic directions continues to fuel his creations though, making him a continually relevant and important artist on the modern Latin Jazz scene. In Part One of our interview with D'Rivera, we explored his early musical training, the influence of his father, and his first moves into jazz. We looked at D'Rivera's time with the Orquesta Cubana De Musica Moderna, the evolution of Irakere, and his first meeting with Dizzy Gillespie during the second piece of our interview. Part Three of our interview focused upon D'Rivera's move to the States, his early gigs in New York, and his time with Gillespie's United Nation Orchestra. In the forth section of our interview, we dug into D'Rivera role in Cachao's revitalized career, Bebo Valdés' resurgence, and the formation of his current quintet. As we complete our interview today, we investigate D'Rivera's classical compositions, the recording of Tango Jazz: Live at Jazz at Lincoln Center, and the creation of Panamericana Suite.

LATIN JAZZ CORNER: You're doing a lot of writing in the classical vein lately. Can you tell us a little bit about your classical composition?

PAQUITO D'RIVERA: I have been receiving a lot of commissions to write pieces. Just last year, I premiered my sonata for clarinet and piano, called “The Cape Cod Files." It was written for clarinetist Jon Manasse and pianist Jon Nakamatsu. Now I am orchestrating a piece that is going to be called “The Cape Cod Double Concerto." I'm still working on my opera. It is an opera that includes different types of voices&#151from operatic voices, to Cuban rumberos, jazz voices, rap, and everything. I recently wrote a piece for a children's choir based upon a poem from a Puerto Rican poet. I am working on a lot of projects. I just presented my new book called “Portraits and Landscapes"—right now it's only available in Spanish, but I'm looking for an English publisher.

LJC: Tango Jazz: Live at Jazz at Lincoln Centeris a great album that you did with Pablo Aslan. It's a live recording with Pablo's group—how did you get involved in that?

PDR: Pablo was commissioned to form a group to do a tango show; it was called Tango Salon. I was a guest artist. He brought in musicians from Argentina and one fantastic twenty-two year old bandoneonist from Switzerland, whose name is Michael Zisman. I think that he's the only jazz bandoneonist on the planet. His father and mother are musicians from Argentina, but he went to a jazz school in Switzerland with the bandoneon. He learned the language of bebop and all that with a tango instrument. The combination is tremendous. So when we were rehearsing, my wife Brenda, who is also my producer and manager, had the idea to record the concert. We asked the people from Jazz At Lincoln Center and we got the permission to do it. We paid for the tapes, we recorded professionally, and the result was Tango Jazz.

The musicians in Pablo's group really defined the spirit on that recording. They brought people from Argentina like my dear friend Gustavo Bergalli, the trumpet player. They had Raul Juarena, a Uruguayan bandoneon player who lives here in New York. They put together a band with two bandoneons—that was really fun. Pablo Agri was a great violin player—he was too much. Pablo Aslan is just so knowledgeable too. On that CD, all I did was play when they told me to play and stop when they told me to stop!

LJC: Tango is a music that is so strongly based around composition. How do you see that working for improvisation?

PDR: It's a combination of both things. We put the jazz element in there and they brought the tango. Plus the players that they brought here from Argentina, they were jazz players. They brought a very fine pianist from Buenos Aires named Abel Rogantini—he was a jazz pianist. Also Daniel “Pipi" Piazzolla was there, who is a fantastic drummer and the grandson of Astor Piazzolla. So there was a group of people there that knew both languages very well.

LJC: I've talked to Pablo Aslan about creating a language for improvisation around tango. Do feel like it's a totally different thing or do you play and it just happens?