SOURCE: ISABELLE DECONINCK
May 10, 2017
Sign in to view read count 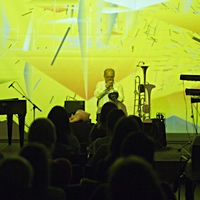 Balassi Institute–Hungarian Cultural Center in New York and Le Poisson Rouge are pleased to present Moment’s Notice, a rare encounter between three leading experimentalists from different corners of new music – jazz trombonist and stalwart of the Hungarian neo-avant-garde László Gőz, acclaimed electronic sound artist György Kurtág Jr., and cimbalom extraordinaire Miklós Lukács. Inspired by the Hungarian electronic classical music scene of the decades of state socialism (1960s-70s), the trio will explore the spirit of the avant-garde and its relevance to today’s new music scene. The performance will be complemented by innovative opto-acoustic projections created by Szabolcs Kerestes and the Budapest–based Binaura Collective. The project launched in 2015, and before their New York appearance, the trio will perform at LACMA in Los Angeles (May 20).

For Moment’s Notice, the Gőz/Kurtág Jr./Lukács Trio will spin an overview of the Hungarian electronic classical music scene that carried the torch of innovation during the repressive decades of state socialism (1960s-70s) – building a spiritual bridge between the experimentalism of the 1920s and the freedom of artistic expression brought about by the end of socialism (1989). The program kicks off with György Ligeti’s classic Artikulation (composed in 1958 in Cologne, then the epicenter of the German electroacoustic movement), accompanied by Rainer Wehinger’s 1970 “visualized sheet music.” The musicians then launch into a series of improvisations based on composed pieces, paying homage to the artistic lumens of the past while maintaining a cohesive vision of the future in the present.

Unique to this project is the electronic music visualization created by Szabolcs Kerestes and programmed by the Binaura Collective. The notes and sounds produced by the musicians will generate opto-acoustic signs and animated sequences, projected in real time and adding a new layer to the improvisation.

László Gőz, Hungarian jazz and contemporary classical artist, professor of music and producer is a well- known studio musician and has contributed to over a hundred albums. In 1996 he founded Budapest Music Center, then in 1998, BMC Records, which has released about a two hundred Hungarian contemporary, jazz, and classical albums up to now. As a musician, his collaborations have included work with Steve Reich, Petr Kotik, Alvin Curran, Chris Newman, Peter Eötvös, György Kurtág, Jiggs Wigham, Carl Fontana, Chris Potter, and Dave Liebman. He was awarded the 2003 Gold Cross of Merit of the Republic of Hungary, the 2008 Chevalier de l´Ordre des Arts et des Lettres (by the French Cultural Minister), the 2015 Knight Cross of the Order of Merit of the Republic of Poland, and the 2015 Knight of Cross from the Order of Merit of the Hungarian Republic.

György Kurtág Jr. studied music in Hungary, before joining the team of the Centre Européen de Recherche Musicale in Metz in 1980. He went on to collaborate with Maurizio Kagel, Péter Eötvös and Sylvano Bussotti, as well as participating in the American tour of Pierre Boulez’s Repons while working on music theory and theories of musical movement, as well as innovation in instrument design. With Daniel Kientzy (saxophone) and Frank Royan Le Mee (vocalist) he founded the ensemble Comité des Fêtes. With György Kurtág Sr. he composed the standout Zwiegespräch for “electronic hybrid" string quartet and synthesizer, as well as film scores and a score of diverse pieces while also researching composition. A regular participant at major international festivals, he also remains in the vanguard of innovative musicological research.

Miklós Lukács is one of the best-known cimbalom players today. His unique style is inspired by contemporary classical music, jazz and folk music from his native Hungary and the Balkans. In 2006, he started his own project, the Lukács Miklós Quintet, and has also composed music for plays, chamber orchestra, solo pieces and concertos for cimbalom. He has performed with musicians including Charles Lloyd, Archie Shepp, Chris Potter, Steve Coleman, Herbie Mann, Uri Caine, Chico Freeman, among others. Lukács has performed as a soloist with several renowned orchestras (Orchestre de la Suisse Romande, the BBC Symphony Orchestra, RAI National Symphony Orchestra, the Warsaw Philharmonic, the Hamburg Philharmonic State Orchestra, the ORF Symphony Orchestra, etc.). His playing is distinguished by a keen sense of musical structure and exploring novel options of playing the cimbalom, making it into a diverse instrument of contemporary music.