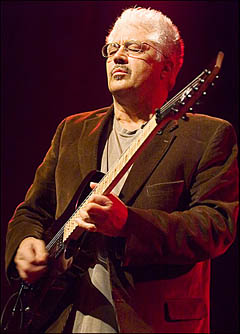 slideshow
Larry Coryell, a guitarist who played rock 'n' roll as a teen but wound up pioneering jazz-rock fusion starting in the mid-1960s and then psychedelic fusion in the early '70s, died on Feb. 19. He was 73.

Born in Texas and raised in Seattle, Coryell studied at the University of Washington while taking private classical guitar lessons. In 1965 when he was 22, Coryell moved to New York just as instrumental folk and rock were intriguing skilled musicians and captivating young audiences.

Coryell's early group, the Free Spirits, was a fascinating hybrid of folk and R&B, combining the California sound of the Byrds and bluesy instrumental riffs found on R&B records by groups such as the Coasters and produced by Jerry Leiber and Mike Stoller. The Free Spirits' first album, Out of Sight and Sound (1966), featured Jim Pepper (ts,fl), Larry Coryell (g,sitar,vcl), Columbus “Chip" Baker (g,vcl), Chris Hills (el-b) and Bob Moses (d).

Coryell's exposure to the bluesy avant-garde jazz of drummer Bob Moses on the drummer's Love Animal (1967) album added an element of sophistication and experimentation to Coryell's guitar playing.

But it wasn't until Coryell's appearance on Gary Burton's albums Duster (April 1967) and Lofty Fake Anagram (Aug. 1967) that he and Gary began to invent a new sound that combined the dreamy energy of rock with the wandering improvisation of jazz. Coryell's rock guitar also began to flower on his first leadership albums, Lady Coryell (1968) and Coryell (1969), particularly the latter, on Jam With Albert.

Here are my favorite Larry Coryell tracks from his early fusion-evolution years:

And here's Ism-Ejercicio from Introducing the Eleventh House with Larry Coryell, recorded in 1973...