SOURCE: ALL ABOUT JAZZ PUBLICITY
February 27, 2008
Sign in to view read count 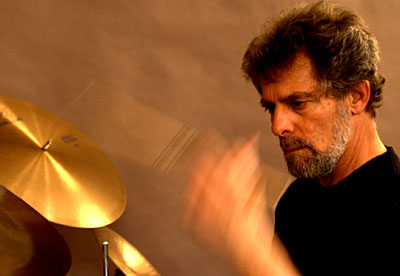 New York, NY - A cooperative trio, Lane / Grassi / Whitecage was borne out of bassist Adam Lane's strong desire to play with saxophonist Mark Whitecage. The link between both musicians was drummer Lou Grassi, who works and records with both musicians in a number of groups. What began in the summer of 2006 as a “Let's get together and see what happens" meeting grew into a tight, empathetic unit able to play one another's compositions with assurance. Portugal's Clean Feed label immediately picked up on the group's unique sound and will release their debut CD in September 2008.

MARK WHITECAGE (alto sax, clarinet, composer) is internationally known as a dynamic, ceaselessly inventive instrumentalist and composer in jazz and new music. Current projects include solo work featuring electronic sound exploration as well as touring and recording with The Nu Band (Roy Campbell, Jr., Joe Fonda, Lou Grassi) and RoMarkable with Rozanne Levine. His latest cooperative trio, Lane / Grassi /Whitecage, will introduce their debut CD on Clean Feed in September 2008. Whitecage has recorded over 50 albums -- a number of them award-winning recordings on CIMP, GM Recordings and his own label, Acoustics. His 2005 Acoustics CD, “BushWacked - A Spoken Opera" was voted one of the year's best by All About Jazz - LA. Since the 1960's he has performed and recorded with some of the leading artists of our time, including Jeanne Lee, Anthony Braxton, Jacques Coursil, Gunter Hampel, Perry Robinson, Dominic Duval, Joe McPhee, Steve Swell and Marshall Allen, in the US, Canada, and Europe. “The man is an absolute master of the alto saxophone and clarinet (not to mention a dab hand at electronics), and one of the finest and most original jazz composers in the world, and has been for years." - Dan Warburton, Paris Transatlantic, Signal to Noise

ADAM LANE (bassist, composer) By combining a disparate set of influences into a unique and personal improvisational voice, Adam Lane has become recognized as one of the most original creative voices in the downtown New York scene. He is the leader of several different ensembles that perform his original creative music compositions. His most recent projects include The Adam Lane Trio, featuring legendary reedist Vinny Golia; Four Corners, a co-led ensemble with reedist Ken Vandermark; The Full Throttle Orchestra, formed to perform Lane's large group music for improvising orchestras; and an ongoing solo project that combines unique processed double bass improvisations with Lane's original storytelling. Lane is the recipient of numerous awards and grants including the Julius Hemphill Award for Large Ensemble Jazz Piece, several Meet the Composer awards, and a Paternings Scholarship award for study at the Darmstadt School for New Music where Lane studied double bass with Steffano Scodanibbio and attended master classes in composition with Karlheinz Stockhausen. Sam Prestianni of Jazziz says of Lane's writing, “His confidence and confrontational prowess as well as his abiding sense of lyricism and heavy-groove power place him in the lineage of forward-jazz adventurism."

LOU GRASSI (drums, composer) is internationally known for his work in both the traditional and the avant-garde jazz worlds. From the 1970's to the present, Lou has performed and/or recorded with a great variety of outstanding artists, including Marshall Allen, Borah Bergman, Rob Brown, Charles Gayle, Urbie Green, Gunter Hampel, Johnny Hartman, Sheila Jordan, William Parker, Perry Robinson, Roswell Rudd, John Tchicai and many others. Lou is the leader of the Lou Grassi PoBand which released five CDs and received critical acclaim worldwide. He is also a member of the collective quartet The Nu Band which tours worldwide and has 3 recordings out. “Lou Grassi is one of those few jazz players who is as comfortable with straight ahead bop as he is with ventures into the realm of the totally free and the creativity and energy are boundless." - Steven A. Loewy, All Music Guide to Jazz