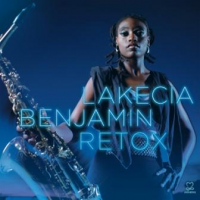 To celebrate the June 12 release of her debut CD, Retox, on Motema Music, saxophonist Lakecia Benjamin, who has played with Stevie Wonder, Alicia Keys, The Roots and Macy Gray, will perform with her soulful, jazz-inflected sax led band, Soul Patrol, at Le Poisson Rouge.

While she's made quite an impact with her impressive sax work on stage and on record, Benjamin opted to take a slightly different tack on RETOX, allowing her talents as a composer and producer to share the spotlight with her funky sax struts. In fact, several of the CD's 12 tracks don't even feature sax. She's chosen to let the vocals carry the song, assembling a collection of edgy vocalists such as Krystle Warren, Amp Fiddler, Maya Azucena, Chinah Blac and Melanie Charles, to join her on an album that's as electrifyingly diverse as the cast that plays on it. “I call my band SoulSquad because, even as a kid, I always wanted to play like I was in an army of funky musicians," says Benjamin.

At the June 12 show, two of the vocalists featured on Retox will share the stage with Lakecia and Soul Squad - Tracey Nicole and Maya Azucena. Also performing that night will be Jean Baylor of Zhane ("Hey Mr. DJ," “Groove Thang), Vickie Natale, Collette and Raydar Ellis.

On RETOX, Benjamin shows off her impeccable, purist jazz resume with a deep, kaleidoscopic and ingeniously arranged mix of original old school soul and funk songs as well as a Stevie Wonder classic, “Don't You Worry 'Bout a Thing." Though her own music is immersed in the vintage sounds of James Brown, Maceo Parker, Sly and the Family Stone and the Meters as well as classic jazz, Benjamin's soaring, dance floor-friendly grooves take the classic vibe to a whole new level. The constant throughout it all is Benjamin's summery, sultry alto saxophone, adding something special, on every cut - be it a smoldering late-night ambience, an erudite, forceful jazz intensity or the tight funk multi-horn harmony sections that pepper the proceedings throughout.

Kicking off Lakecia's party will be DJ Center. A Center set is synonymous with the finest of selections, whether he is doing music supervision for Gucci, recording radio sessions for Giant Step, or keeping NYC parties on their feet until the wee hours. Always aiming to break new music and celebrate forgotten gems, Center's sound has maintained his signature styling of soulful, feel- good music for audiences worldwide. Live, Center has brought together artists like Talib Kweli, Rob Swift, ?uestlove, Pete Rock, Grandmaster Flash, J.Rawls and Eric Roberson.

Currently, Benjamin is a featured musician and arranger for comedy star Craig Robinson and the Nasty Delicious. (Robinson, best known for his work on TV's The Office as well as such popular films as Pineapple Express and Hot Tub Time Machine, tours regularly with the Nasty Delicious band serving as the main foil in his popular comedy act). Benjamin has also had the honor of performing at the White House at President Obama's inaugural ball. She's performed on four continents and her extensive recording credits include saxophone and arrangements for Santigold, Maurice Brown, the Clark Terry Big Band, Krystle Warren and Talib Kweli, among others.