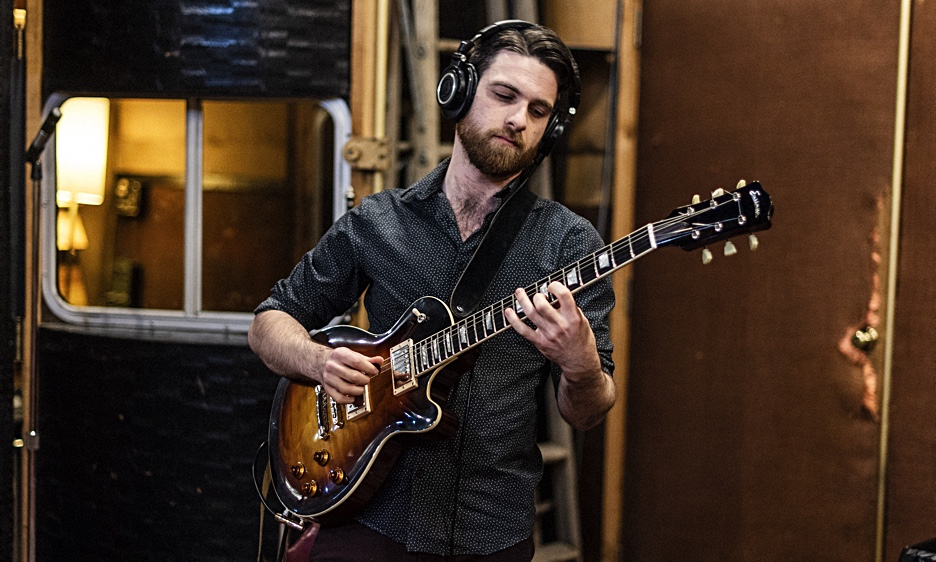 In January of 2019 Zakk Jones and his trio recorded their debut album Mise-en-Scéne at Musicol, one of the oldest studios in the Mid-Ohio region. Compromised of seven tracks, mostly original material, the album ranges in styles s as varied as modern jazz, fusion, avant-garde and americana/country, often even in the same songs. With the trio's sound and aesthetic, the vintage vibe in Studio A of Musicol was the perfect fit to track everything live with some one-of-a-kind vintage gear. This will eventually be pressed onto 300 Vinyl records. Since 1971, John Hull (owner) has been pressing vinyl in almost the exact same ways ever since, adding a nostalgic and personal touch to audiences both young and old. Having met in their undergraduate studies years ago, the trio has spent countless hours gigging, rehearsing, writing and simply hanging together, which is all an anchor for their strong musical connection. The Zakk Jones Trio has performed at venues/clubs like Bar Next Door (NYC), Bop Stop (Cleveland), Dick's Den (Columbus), Schwartz's Point Jazz & Acoustic Club (Cincinnati) Pausa Art House (Buffalo) Light Club Lamp Shop (Burlington, Vt) and many more!

“Playing trio just happens to be one of the best, and hardest, things out there for anyone in Jazz-land. Being a guitarist, I have always admired and been in awe of the freedom, trust, and playfulness that's found in the trio setting. I pretty much have always thought to myself “THAT, is what I want to do...forever" Over the years I've had the pleasure of playing trio with a TON of people, and have really heard myself grow the most through these moments.

I decided that 2019 would be the year to showcase what my own trio has been working on for the last few months. I've been playing with my boys (John Allen, Ryan Folger) for years now, and since focusing on our collective sound we've crossed into some equally beautiful, introspective, aggressive and downright wild territory at times. I don't really feel the need or pressure to put any labels on it, but I'd probably say it lives in some warped parallel universe where jazz, americana, folk, fusion, avant-garde and the grotesque all sort of had an orgy and the squishy-squelchy-sexy sounds were recorded and implanted into my head a few lifetimes ago. “

Zakk has hired a team of industry professionals to help bring the album to completion, including Grammy-award winning Mixing Engineer Rob Griffin, whose work with the Wayne Shorter Quartet (among many hundreds of artists) has garnered him a world-wide reputation. To attain the best product, a Kickstarter campaign has begun, hoping to secure the necessary funds in putting the album out in a timely manner so the Zakk Jones Trio can focus on touring and promotion. Hitting their projected goal of $5,000 will see that the project is completed with as little sacrifice to the art and aesthetic as possible.

Zakk Jones is a Columbus-based guitarist, composer/arranger, and educator with a B.M. in Jazz Studies from Capital University. Raised in Portland, OR, he started playing piano at the age of six, eventually receiving regional and national awards for composition with the PTA and “Fear No Music” project. After picking up the guitar in middle school, Zakk focused on playing in bands and preparing for music school, eventually attending Capital University with a large scholarship. In his 7+ years on the Columbus scene he has had the opportunity to play at major venues and festivals both locally and all over the country. He regularly tours and performs with Doc Robinson, Popgun, Safety Squad, Chris Jamison (from NBC’s The Voice), the Andy Shaw Band, the Coasters (legendary R&B group), Tony Monaco, Peter Mazza, Corey Christiansen, Jonathan Kreisberg, and Gilad Hekselman. Besides performing, Zakk Jones is an adjunct faculty member at Mt. Vernon Nazarene University where he heads the guitar studio. He is also a columnist for Jazz Guitar Today, a stage manager for the yearly JEN (Jazz Education Network) Conference, and proudly has three cats.

For more information, simply watch the Kickstarter video and read through the campaign. There are a variety of reward levels with great perks...no donation is too small! If you like what you see/hear, SHARE the Kickstarter link, or this announcement.