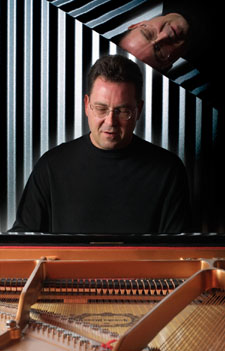 slideshow
You may not know keyboardist David Witham's work, but the chances are actually pretty good that you've actually seen him play. As the musical director for jazz/pop guitar icon George Benson, the L.A. based Witham has put in plenty of road time, and he's also done side work with Chick Corea, k.d. lang, Randy and Michael Brecker, Ernie Watts and Jeff Gauthier.

It's great to be a working musician, and Witham never has to worry about being out of work. But until last year, his recorded output consisted of one album: On Line, a self-released effort recorded in 1988.

Two decades is not a short time between albums. And no matter how capable a musician is as a sideman, writing and performing music as a bandleader is, well, different. Witham's good enough a player to do any music--but what kind of music is “David Witham" music?

AAJ Contributing Editor Paul Olson spoke with Witham in detail about the recording of his 2007 Cryptogramophone release, Spinning the Circle, the life of a sideman and moving from playing with Cryptogramophone head/violinist Jeff Gauthier's left-of-center Goatette to being in the pit band for The Lion King and Wicked.

Check out David Witham: A Sideman Steps Out at AAJ today!