SOURCE: ALL ABOUT JAZZ PUBLICITY
February 18, 2008
Sign in to view read count 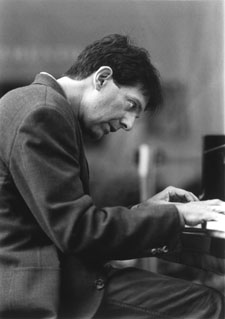 slideshow
Any discussion of Alan Pasqua must start with at the scintillating beginning of his official discography. His first recorded performance featured the then 23-year-old wunderkind of Fender Rhodes on The New Tony Williams Lifetime's Believe It (Columbia, 1975). His first sounds committed to wax were texturized Rhodes thickening “Snake Oil," then shadowing its serpentine melody as stated by Allan Holdsworth, a guitarist seemingly stolen from the future by the unit's provocative leader, the now-legendary Williams. At that time, the drummer had rededicated himself to somehow reenergizing his already incendiary Lifetime phase by completely revamping it with new talent.

Today, Pasqua's career revolves more closely around the jazz world, as he continues to release acoustic sessions with his former college roommate, drummer Peter Erskine. But he's somehow remained relatively underrated as a composer and performer of electric jazz, and unheralded for his groundbreaking and seminal work, both harmonically and as a sound-sculptor, as it relates to the evolution of electric piano styles. That changed in 2007, as fans of electric jazz were gifted with two stellar recordings, one of which was a live DVD with Allan Holdsworth, complete with state-of-the-art sound and video quality, recorded at Yoshi's. But it was The Antisocial Club (Cryptogramophone), one of 2007's finest releases, which packed the most stunning surprises. With new personnel, new tunes, a new keyboard providing a new arsenal of sounds, and a discriminating genre-specific aesthetic that remains intact and strikingly up-to-date, Pasqua accomplished nothing less than re-evolutionizing that previous Lifetime right into this one. It's like he never stopped.

AAJ's Phil DiPietro spoke at length with Pasqua, about his work as a leader, being recruited by Tony Williams, his trio recordings with Peter Erskine and Dave Carpenter, and much, much more.