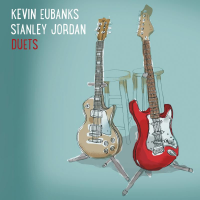 slideshow
Multifaceted guitar heroes Kevin Eubanks and Stanley Jordan recording a Duets album: an idea that as soon as you hear it, you wonder why nobody, including you, thought of it until now. Eubanks, the Philadelphia native who took New York by storm starting out in straight ahead jazz clubs then progressive albums for contemporary jazz giant GRP Records and legendary Blue Note Records, frequent collaborations with cutting-edge bassist Dave Holland, then 18 years in Jay Leno’s The Tonight Show Band (15 as Music Director) where he played with seemingly every meaningful musician across genres. Jordan, the Chicago-born/Bay Area-raised phenomenon who mesmerized audiences with his instantly identifiable “touch technique” on guitar beginning with his gold-selling Blue Note Records debut Magic Touch (featuring his radio staple remake of Michael Jackson’s “The Lady in My Life”), followed by a string of wide-ranging endeavors including a one-off for Clive Davis’ Arista Records and explorations into the field of music therapy. Add that, between them, both gentlemen play piano, bass and keyboards—and arrange and compose—and the possibilities become truly inviting. Surely Eubanks and Jordan would make some engaging “beyond boundaries” music together. That they do on their serenely seamless 10-song Mack Avenue Records outing, Duets—spontaneous compositions and passionate arrangements that will send listeners’ imaginations on a series of hypnotic journeys.

The impeccably balanced Duets includes four all new “skull arrangements” (so called because they were jointly created off the top of their heads), versions of four well-known classics: “Nature Boy,” “Blue In Green,” “Summertime” and “A Child Is Born;” plus interpretations of a modern pop song (Adele’s “Someone Like You”) and an electronic dance pop hit (Ellie Goulding’s “Lights”). These were the all-natural uncalculated result of long philosophical heart to hearts as well as a 9-city tour—over 30 years after Eubanks’ and Jordan’s first meeting in the early ‘80s at New York’s famed jazz-fusion club, the 55 Grand.

“We’ve known each other since the early ‘80s,” Eubanks opens. “Since then we’d see each other mostly on festival stages.” Jordan adds, “I knew him as one of the best musicians in the early days, before any of us were well known beyond the inner music circles... a guitarist with an unconventional finger style technique. I could relate to that. We were going for something different and I never viewed him as a competitor. The music was big enough for both of us.”

The game changer occurred in September 2011 within the idyllic setting of Village Square in British Columbia at the inaugural Jazz on the Mountain at Whistler festival. Both guitarists were on the bill with Eubanks also presiding as Artist in Residence. Jordan stopped to watch Eubanks give an outdoor interview and found himself additionally impressed by several beliefs and principles he was sharing. “It’s about the challenges of being an eclectic musician in a world where everything is so tightly formatted,” Jordan explains. “He had a lot to say. Afterwards, we talked for a really long time—hours. That’s when the seed for us doing something together was planted.” Eubanks adds, “Stanley and I are in alignment on a number of things. We share an open-mindedness that’s about inclusiveness instead of exclusiveness—that, ultimately, sharing is better than not.”

They decided to do a short tour; initially playing separate sets with someone occasionally popping in on the other’s time. Word got back that audiences liked it best in those moments when they played together. Everything changed during a sound check in Texas, April 2013. “We were in an all-wooden church where the acoustics were fantastic,” Eubanks recalls. “We started playing, looked at each other, and felt how easy and nice everything flowed. That exchange created a lot of energy. The show flipped to us starting the show together, playing a couple songs alone, then us back together to close. Musicians sometimes get so myopic in their own world and need to get their minds past the foot of the stage. This was a case where the audience had a broader picture of what was possible than we did.”

The next step was documenting their developing concepts on a recording. Their disparate schedules delayed not only their recording, but also making time to prepare before they went in. Most of what you hear on Duets was conceptualized during the week of recording in Eubanks’ state-of-the-art facility—a studio as good as most in Hollywood—down where his basement used to be, complete with Neve console, a Steinway piano and booths for every instrument. He recorded all of his most recent Mack Avenue releases there. “We didn’t know anything we were going to do until Stanley came to the house,” Eubanks says. “We’d planned to get together to hash it all out but we never got around to it until we had to – on the session.” Jordan explains, “I had a lot of gigs during that time. I relied on Kevin to do a lot of the detail work that made the album feel like a whole. I knew from his experience creating The Tonight Show arrangements night after night that the process for him had become as effortless as breathing.”

One interesting reveal is both of them playing some piano in addition to guitars, an especially major deal for Eubanks. “My mom played, my uncle Ray Bryant played and I grew up listening to piano, transcribing Oscar Peterson,” he says. “Guitar was my career. Piano was for relaxing. I enjoyed the freedom of not having to be good on piano but I’m excited now to put myself out there on Thad Jones’ ‘A Child Is Born,’ the first song that made me feel like I was really playing something years ago. It opened up a lot of things for me on piano.”

Also of note are their delicate spins on more modern covers. “I brought in the Adele and Stanley brought in ‘Lights.’ I looked at it as a real opportunity to incorporate them into something with a nice fresh feel but still be appreciated by the artists that wrote them.” Stanley adds, “During my road trips I comb the radio dial and I listen to all kinds of music. When I heard ‘Lights’ I knew this was a recognizable song we could do in our own way. It was a little tricky because production plays such a big role in songs today. Jazz is more about melody and harmony. I chose ‘Lights’ because of its hauntingly beautiful melody and sweet chords. I think the version we created is something special on its own.”

Most exciting are the four “skull arrangements” that started as jams, then evolved in the studio over a few takes, giving the duo organic arranging ideas to get from point A to B. Jordan defines these pieces as “the real essence of what we do.” Eubanks adds, “You get more out of the deal when people are involved with a willingness to make the whole thing bigger than ‘my part and your part.’ Together we’ve got this thing that’s bigger than anything we can do alone.” Kevin absorbed substantial inspiration toward this direction from young musicians he encounters today. “I really love the cats coming up in jazz. They are the most respectful group of ladies and gentlemen. Their excitement has no trace of bitterness and they bring so much more to the table. One cat is designing an app to help him keep a band together. That wasn’t around when I was coming up. It makes them more open minded about, ‘How do we get the music out there?’ Music should be the portal that unites instead of the door that separates people.”

Summing up Kevin Eubanks’ and Stanley Jordan’s inaugural Duets recording, Jordan thoughtfully concludes, “This album fills a nice niche because it’s relaxing yet engaging. When you hear Kevin and me playing together, it’s all about the music and supporting each other. I just love the feel of it—it has a real sweetness. People who listen from their heart are really going to love this record as an antidote to the norm.”